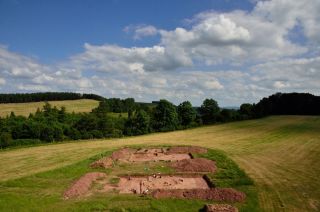 Excavations at Dorstone Hill in the UK revealed a nearly 6,000-year-old set of burial mounds that were created from the ashes of an ancient longhall.
(Image: © University of Manchester)

The two wooden long-buildings, or halls, were burnt to the ground; the ashes were then shoveled in to make burial mounds.

"The buildings seemed to have been deliberately burned down," said Julian Thomas, the archaeologist leading the excavation and a professor at the University of Manchester.

Researchers believe these halls of the living may have been transformed into "halls of the dead" after a leader or important social figure died. [The 10 Weirdest Ways We Deal with the Dead]

The find was uncovered in an open field near Dorstone Hill, Herefordshire in the UK. For decades, amateur archaeologists have noticed pieces of flint blades in the area and wondered whether the land there contained relics of a long-forgotten time.

When Thomas and his team began excavating, they found two large burial mounds, or barrows, that could have held anywhere from seven to 30 people each.

The smaller barrow contained a 23-foot-long (7 meters) mortuary chamber with sockets for two huge tree trunks. Digging deeper, the researchers uncovered postholes, ash from the timbers, and charred clay from the walls of an ancient structure.

These burnt remains came from what were once two long-halls, the biggest of which was up to 230 feet (70 m) long, with aisles delineated by wooden posts and several internal spaces.

Though it's not clear exactly who built the halls and barrows, the building construction is similar to that found in England between 4000 B.C. and 3600 B.C, predating the construction of Stonehenge by up to 1,000 years.

The period was one of social upheaval, when the original hunter-gatherer culture in the area gave way to an agricultural lifestyle with much more rigid social hierarchies.

"These are communities for whom the inheritance and maintenance of wealth becomes important," Thomas said.

"Although the roof and doors of wattle and daub will burn quite quickly, the main timbers will take a long time to be burned, and that requires you to feed the fire," possibly over several days, Thomas told LiveScience.

Neolithic people may have originally built the large halls as communal gathering spaces.

But once some critical event happened about 50 to 100 years later — perhaps the death of a leader or important social figure — the community probably burnt the halls to the ground to commemorate the event, using the ashes to make large burial structures, Thomas said.

The discovery strengthens the idea that prehistoric people saw a strong connection between the houses of the living and those of the dead. Under this view, ancient tombs were seen as representations of dwelling places for the living.

"Archaeologists have talked for a long time about the idea that you've got a relationship between houses of the living and houses of dead," Thomas said. "Here, you've got it manifested in the sense that the debris of a house was incorporated into a tomb."

The site drew people for generations. Long after the long halls were burned, people added a series of stone burial chambers to the grounds, Thomas said. The site also contains a flint axe and flint knife that were placed there up to 1,000 years after the hall was first erected.