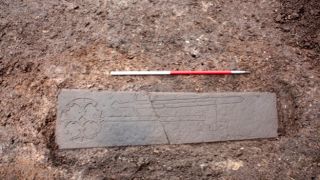 This carved slab, thought to be the headstone of a medieval knight, was found under a parking lot in Edinburgh.
(Image: © Headland Archaeology/ Edinburgh Centre for Carbon Innovation)

A medieval headstone and skeleton have been found underneath a parking lot in Scotland, and researchers believe they might belong to a knight.

Archaeologists who were on hand during the construction of a new building in Edinburgh uncovered a carved sandstone slab, decorated with markers of nobility — a Calvary cross and a sword. Nearby, the team found an adult skeleton, which is thought to have once occupied the grave. Scientists plan to analyze the bones and teeth to learn more about this possible knight or nobleman.

"We hope to find out more about the person buried in the tomb once we remove the headstone and get to the remains underneath, but our archaeologists have already dated the gravestone to the thirteenth century," Richard Lewis, a member of the City of Edinburgh Council, said in a statement.

"This find has the potential to be one of the most significant and exciting archaeological discoveries in the city for many years, providing us with yet more clues as to what life was like in medieval Edinburgh." [8 Grisly Archaeological Discoveries]

Builders at the site expected they would find historic objects during construction. Before it became a parking lot (coincidentally, once used by the University of Edinburgh's archaeology department), the site housed the 17th-century Royal High School, the 16th-century Old High School, and the 13th-century Blackfriars Monastery, researchers said. Archaeologists also apparently uncovered some medieval remains of the monastery, which had been destroyed and somewhat lost since the Protestant Reformation in the 16th century.

"We always knew that the building retrofit might uncover historical artifacts — given the site's history — but this knight is an extraordinary and exciting find," said Andy Kerr, director of the Edinburgh Center for Carbon Innovation, which is undertaking the construction at the site.

Parking lots are turning out to be treasure troves in the United Kingdom. Last summer, a mutilated skeleton was unearthed from a medieval church that had been buried underneath a lot in Leicester, England. Scientists recently announced that the bones were confirmed to belong to King Richard III, who was apparently buried there after his death at the Battle of Bosworth Field, during the War of the Roses. In fact, the English monarch's remains are still the center of much fascination and passionate debate. For instance, was the real-life king the villain described in the Shakespeare play of his namesake? And where should King Richard III's bones be re-interred?