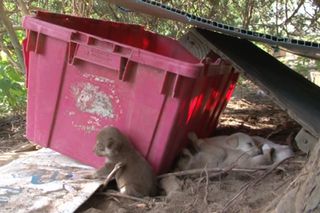 These puppies were rescued along with almost 100 other animals from a rural home in Arkansas.
(Image: © HSUS.)

A few months back, The HSUS' Animal Rescue Team received a call from a law enforcement officer, Corporal Robert Alcon, of the Arkansas State Police, who'd discovered almost 100 animals in need of rescue in White County, Ark. Numerous animals were confined in a trailer on the property, while others were chained outside without shelter or shade. Many of the animals were suffering from respiratory problems, as well as skin, eye and ear conditions.

Cpl. Alcon was determined to help, and described appalling conditions to The HSUS. Over the next several months, our team worked with him and his colleagues to put the pieces in place for a rescue. This included finding and setting up a temporary shelter where the animals could be housed and reaching out to local resources who might be willing to help with the case. Eventually, we lined up a shelter and garnered help from some excellent local and national partners, including Central Arkansas Rescue Effort for Animals, the Humane Society of Saline County and Red Rover.

Seizure day revealed emotionally disturbing conditions for the responders. Many animals were living in filth, lacking basic needs like appropriate shelter from the elements, and often had no access to water. Our team reported the following from the field:

"The day that we were in the field was excruciatingly hot, and many of the animals sat outside baking in the sun, desperate for relief. One tiny puppy seemed grateful for even a small lick of water from the top of a water bottle. . . . We removed the animals from the scene and transported them to our emergency shelter. Late that night, we tucked them into their new digs, and then returned the next morning to begin thorough veterinary exams. Even after one day, the animals' conditions were improving, and their kisses and wagging tails seemed to say 'thank you!'"

State troopers served an arrest warrant on the property.

The HSUS is ready and we're there. It's yet another instance of our team coming in to assist when a crisis situation exceeds the capacity of local humane and law-enforcement organizations to respond. It's a great example of the complementary work of local organizations with a national group like The HSUS.

We're grateful for the collaboration demonstrated by local law enforcement and we so appreciate the tireless efforts of CARE, The Humane Society of Saline County and Red Rover.

Thanks to this team effort, these animals have brighter days ahead.

Pacelle's most recent Op-Ed was Not Science, but Slaughter: Japanese Whaling Tried in International Court. This article first appeared as Dramatic Animal Rescue in Arkansas on the HSUS blog A Humane Nation. The views expressed are those of the author and do not necessarily reflect the views of the publisher. This article was originally published on LiveScience.com.