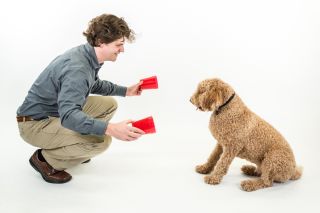 Brian Hare is an evolutionary anthropologist at Duke University and the founder of Dognition, a website that helps you find the genius in your dog. This post was an adaptation from his book "The Genius of Dogs," co-authored by Vanessa Woods (Dutton, 2013). He contributed this article to LiveScience's Expert Voices: Op-Ed & Insights.

If you have ever wondered what is going on inside your dog's mind, science can now help you find out. My collaborators and I recently created a Web-based tool, Dognition, that uses cutting-edge research to help dog owners better understand their dogs while, at the same time, contributing to the biggest study of canine cognition in history.

My research journey with dogs started one day when I was 19 years old. I was in my parents' garage in Atlanta, where an old canoe was strapped haphazardly to the ceiling, lending a sense of adventure, since it could fall down at any second. Splotches of grease and paint decorated the floor, and a cold fall wind blew in, as the garage had no door.

Sitting in front of me was my best friend, a slobbering black Labrador retriever named Oreo. While Oreo watched, I placed two plastic cups about two meters apart, faked putting food under one cup, and surreptitiously placed a dog biscuit under the other one. Then, I did something Oreo had never seen before: I stood in the middle of the two cups and pointed to the one that had food inside. Oreo bounded over to the cup I pointed at, knocking it over and drooling all over the floor as he ate the treat.

Little did I know that simple moment would define my scientific career. Oreo had used my communicative gesture to make a social inference — something not even our closest ape relatives can do.

I've worked with many species, from lemurs to bonobos, and conducted research all over the world, from Siberia to the Congo. But the most fun I've ever had with my research was in my parents' garage, with Oreo slobbering all over my face.

Since then, the study of dog cognition has exploded. Scientists have learned more about dogs in the past decade than in the past century, and these advancements are largely thanks to ordinary dog owners. Instead of keeping dogs in cages on campus, dog research follows the same model as infant research, in which parents are invited to bring their children to universities to participate in studies.

At the Duke Canine Cognition Center, people bring their dogs so my collaborators and I can teach them to play games that reveal how dogs think. I'm always touched with how fascinated people are with their dogs' performances during the games, and how afterward, they feel like they know their dog a little better. It reminds me of my original excitement with Oreo.

However, the experiments have their limitations. It's hard for my colleagues and I to test large numbers of dogs quickly. This means we can't really examine the effect of rearing history, age, sex and breed type, and the interaction of these variables. Most of the time, we are limited to looking at a single cognitive skill in a sample of 10 to 50 dogs.

Finally, while dog owners are unfailingly generous with their time, and excited by whatever tidbits we can share, the scientific method is glacially slow, and owners may have to wait years before my collaborators and I publish the study in which the owners and their dogs participated. Even then, the study is about dogs in general, not about their dogs.

That was when I got the idea for Dognition, where people all over the world can play games with their dogs at home and make the same kinds of discoveries we do. The experiments we run aren't rocket science. Our field is so underfunded that we often have to make our equipment out of whatever we have lying around the house: cups, duct tape and empty Coke bottles are some of our staples. And the games have to be fun; otherwise, animals won't play them.

With Dognition, owners go to the website, register their dogs, complete a personality questionnaire and play games (some of them for free) to find out the strategies their dogs use to navigate the world. At the same time, the data goes into a database that can help contribute to our knowledge of all dogs .

The concept had to be privately funded. No federal funding organization is going to devote money to studying what dog lovers are interested in, like whether a Great Dane is more empathetic than a Chihuahua, or if dogs lose communicative abilities as they get older.

Similar to crowdfunding sites such as Petridish, my collaborators and I ask people to directly contribute to an area of science because they think it is interesting. And like human testing websites, such as Luminosity and Ancestry, we take raw data and give people information that is specifically tailored to their dogs.

Already, thousands of people have signed up to participate in Dognition, and they give us the hope of answering questions we could only dream about answering before. (The New York Times called it 'enlisting a virtual pack'.) For instance, from initial data in the beta program, it looks like there is a link between empathy and cunning in a dog — that is, dogs who are most bonded to their owners are most likely to use their owners' social information to deceive them.

Since part of Dognition is free, it is accessible to everyone. I would love to see kids put down their video games for an afternoon and enjoy science — without even realizing it.

My hope is that this could become a modern model for science — part crowdfunding, part citizen science — as well as fun way to discover something new with your best friend.

Some of this post was adapted from Hare's book The Genius of Dogs. Hare's most recent Op-Ed was "Darwin's Dark Knight: Scientist Risked Execution for Fox Study." The views expressed are those of the author and do not necessarily reflect the views of the publisher. This article was originally published on LiveScience.com.