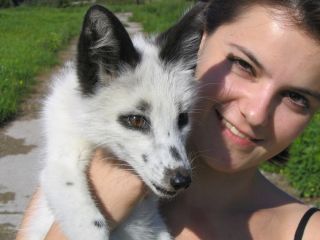 This fox is domesticated, the product of generations of breeding in experiments initiated by Dmitri Konstantinovich Belyaev.
(Image: © Brian Hare.)

Brian Hare is an evolutionary anthropologist at Duke University and the founder of Dognition, a website that helps you find the genius in your dog. This post was an adaptation from his book "The Genius of Dogs," co-authored with Vanessa Woods (Dutton, 2013). He contributed this article to LiveScience's Expert Voices: Op-Ed & Insights.

Today (July 17) is the birthday of one of the most important scientists you've probably never heard of — Dmitri Konstantinovich Belyaev. In the chokehold of Stalin's Russia, where being a geneticist was likely to get you imprisoned, shot or both, Belyaev conducted perhaps the greatest genetics experiment of the 20th century and finally solved the puzzle of how the wolf turned into the dog.

For almost a century, Darwin's biggest idea had a hole in it. To illustrate natural selection, Darwin did not directly suggest that humans shared a common ancestor with apes. Instead, he used a concept that everyone was familiar with — domestication. Everyone knew that you could selectively breed dogs for certain physical characteristics, like size or coat color. Darwin wanted to stretch this idea a little further and suggest that instead of a human hand, it was natural selection that drove evolution.

The problem was that Darwin could not say how domestication started in the first place. No one was taking notes while the first wolf  changed into a dog, or a wild boar into a pig. This is where Belyaev stepped in and quietly began a Herculean task that no one would have thought possible — he domesticated a species from scratch.

After World War II was not a good time to be a geneticist in Russia. Darwinism was seen as a justification that capitalists should have millions and workers live in poverty because the capitalists had superior strength or intelligence. In 1948, genetics was banned in Russia. Genetic institutions were closed and information on genetics was removed from textbooks. Punishment for carrying on genetic work was swift and severe. Belyaev's own brother, a geneticist, was arrested by the secret police and shot without trial.

Belyaev began his experiment with the silver fox, because he could disguise his work as a commercial endeavor. Silver foxes were prized in Russia for their fur, and Belyaev's official research objective was trying to breed foxes for better fur. [Adopt a Pet Fox, for Science's Sake]

Instead of trying to create a domesticated species by selecting for each physical trait, Belyaev selected for one simple behavioral trait — whether the foxes would approach a human hand.

After only 45 generations, the experimental foxes began to change in ways that might take thousands if not millions of years in the wild. By the time I arrived years later to see the ongoing work, Belyaev's experimental foxes were radically different from their control population. They had smaller skulls and canine teeth. Their coats were splotchy and their tails were curled. They also had floppy ears and barked.

When I met the bred foxes for the first time, one jumped in my arms and licked my face. The difference between the experimental and the control foxes were remarkably like the differences between wolves  and dogs.

Belyaev had done it. He had taken a population of wild animals and essentially domesticated them. And not just that, he had figured out the mechanism by which it happened — not by intentionally breeding for each physical trait, but by selecting only for behavior. That is, by allowing to breed those animals that were friendly toward people.

There was one more change I was interested in when I tested the foxes in 2004. My team's previous research had shown that dogs are remarkable at reading human communicative gestures. Dogs were better than wolves, and better than even humans' closest living relatives, chimpanzees . The question was whether Belyaev's foxes would share this talent for reading human gestures.

They did. This had huge implications to how scientists think about the domestication of dogs. The most common assumption is that some hunter-gatherer with a soft spot for cuteness found some wolf puppies and adopted them.

Instead, the foxes raise the real possibility that natural selection may have shaped wolves into the first proto-dogs in a very similar way without intentional human intervention or control. Ray Coppinger of Hampshire College and others have speculated that as humans began forming more permanent settlements over the last 15,000 years, a new canine food source appeared that led directly to the evolution of the dogs we know and love — garbage.

Only those wolves who were least fearful and nonaggressive toward humans would be able to take advantage of that new source of food. It would not have taken many generations for those friendlier wolves to undergo physical changes, like coat color. Soon, the wolves stopped looking like wolves. Many would have splotchy coats, and some would have even had floppy ears or a curly tail. Like the foxes, they too accidentally became more skilled at responding to the behavior of humans, and a new relationship began.

It's not always easy being an evolutionary biologist in this day and age. But whenever I start feeling sorry for myself, I think of Belyaev, working undercover with death never far from his door. Belyaev's quiet heroism is something to aspire to, and although the true magnitude of his discoveries was not realized until after his death in 1985, his work was an invaluable contribution that will have implications far into the future.

Hare's most recent Op-Ed was Dogs Show IQ Tests Aren't So Smart. The views expressed are those of the author and do not necessarily reflect the views of the publisher. This article was originally published on LiveScience.com.