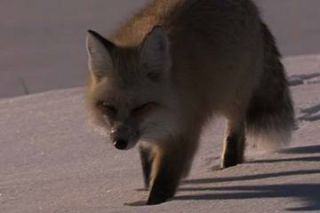 A fox breeding program in Russia may help reveal the genetic roots of domestication of animals.

Humans have an almost absurd affinity for turning wild animals into unlikely pets: Elephants, Burmese pythons and Siberian tigers have been kept as household pets, with limited success.

Now there's a new contender in the exotic pet game, one that actually might sit and stay: the common fox, Vulpes vulpes, a wily critter known as the bane of chicken farmers everywhere. And the foxes' domestication may reveal the genetic influences behind the domestication of all animals, PopSci.com reports.

A widely respected fox-breeding program in Russia, the Institute of Cytology and Genetics in Novosibirsk, has garnered worldwide attention for its work in fox domestication; it even has received some funding from the U.S. National Institutes of Health, according to National Geographic.

Started in the 1950s by a Soviet geneticist named Dmitry Belyaev, the institute began selectively breeding domesticated foxes by choosing the tamest and friendliest individuals from fur farms.

The program was a wild success: Within a few generations, it was able to breed foxes that not only tolerated human contact but actually sought out humans, displaying the tail-wagging and face-licking affection familiar to every dog owner, National Geographic reports. [10 Things You Didn't Know About Dogs]

"They remind me a lot of golden retrievers, who are basically not aware that there are good people, bad people, people that they have met before, and those they haven't," Dr. Anna Kukekova, an animal health researcher at Cornell University, told National Geographic.

Not only was the foxes' behavior more domesticated, but their physical appearance began to change over the generations, too, PopSci.com reports. Pointy fox ears began to get droopy, and their furry tails started to curl up over their backs. In short, by breeding an animal that acts like a dog, the researchers bred animals that also started to look like dogs.

And researchers at the Max Planck Institute for Evolutionary Anthropology in Leipzig, Germany, have found that foxes from the Russian breeding program would respond to pointing commands almost as well as dogs, signaling that they're attuned to human interests, according to Slate.com.

The real test of domestication, however, lies in the behavior of young fox pups, called kits. While any wild animal can be trained to act tame, true domestication is revealed in the behavior of their untrained young. Would the breeding program produce kits as friendly as mature foxes accustomed to human interaction, or would the kits revert to wild, chicken-snatching ways?

We may never know. Grant money in Russia for the fox breeding program has largely dried up, Slate.com reports — and this is where foxes as pets entered the picture. To raise funds, the institute has started a pet adoption program: For about $8,000, a fox from the Russian breeding program can be yours through a partnership with a company called The Domestic Fox.

Be aware, however, that foxes — like most exotic pets — can be trouble. Their digging instinct is very strong, so they need an enclosed outdoor spot or you can kiss your carpet goodbye. Also, their urine is described as reeking "like skunk; "it's the most pungent thing in the universe," PopSci.com reports.

Research into the possible genetic roots of domestication continues through Cornell. By comparing the DNA of friendly, tamed foxes with the DNA of more aggressive foxes, Kukekova and her fellow researchers have isolated two distinct DNA regions that may hold the genes critical for the domestication of all animals. This discovery led the researchers to conclude that domestication is probably driven not by a single gene but by a complex suite of genetic changes, National Geographic reports.