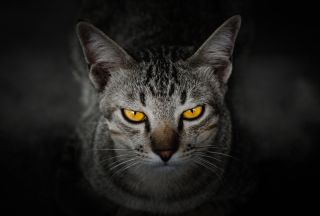 A gang of feral cats attacked a woman and her dog in France.
(Image: © Chayasit Fangem | Shutterstock.com)

One more reason to love dogs: A gang of feral cats in France attacked a woman and her poodle, forcing both victims to seek medical attention for their injuries.

The cat-attack occurred Sunday (July 21) near the city of Belfort in eastern France. The 31-year-old woman was walking her dog near a wooded area when six felines set upon her, knocking her to the ground, The Independent reports.

The victim was treated for injuries at a nearby hospital where she was also given an injection for rabies. Her poodle was treated at a nearby veterinary clinic. [10 Amazing Facts About Cats]

Josette Galliot, the mother of the victim, said, "The cats jumped on my daughter and managed to knock her over. They bit her on the leg and on her arms. They even pierced an artery."

"My daughter thought it was a living nightmare. She's still traumatized and is bordering on depression," Galliot said.

Veterinarians and local residents are divided over what may have provoked the feline fury. According to some observers, a recent heat wave in the area may have played a part in the unusual mauling.

Veterinary specialist Valerie Dramard believes the cats were protecting their territory from the poodle, and the woman simply got in the way.

"Cats are not new zombies of the apocalypse," Dramard said reassuringly. "They are just very territorial and unfriendly with unknown species."

But cats are known as aggressive hunters, too: Recent research has revealed that cats kill between 1.4 billion and 3.7 billion birds, and between 6.9 billion and 20.7 billion small mammals, each year in the United States.

Some wildlife conservationists have even proposed a ban on cats, or at least prohibitions against free-roaming cats. "We have long accepted the fact that you can't let your dog run free, and yet cat owners seem to take offense at the idea that they would be asked to keep their cats indoors," Stanley Temple, University of Wisconsin-Madison professor emeritus in conservation, told LiveScience.

About 8,000 feral cats are born every day in France, according to The Independent.

"We must get rid of this scourge," Galliot said. "There are too many cats in the neighborhood, many of which are strays. There are also lots of children here. We don't want it to happen again."

For cat lovers, rest assured: Researchers at the University of Oxford have noted that, while numbers are trickier to come by, domestic dogs are also killers of wildlife and disease-spreaders when they're allowed to roam free outdoors. The scientists' review of past studies on the effect of roaming domestic dogs was detailed this year in the journal Biological Conservation.