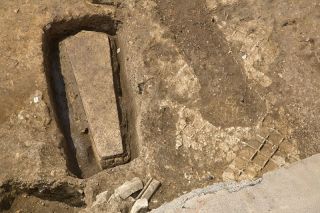 An intact stone coffin found in the ruins of Grey Friars, the monastery where Richard III was buried.
(Image: © University of Leicester)

Archaeologists are set to lift the lid on a stone coffin discovered at the site of the English friary where Richard III's remains were found.

Excavators suspect the tomb — billed as the only intact stone coffin found in Leicester — may contain the skeleton of a medieval knight or one of the high-status friars thought to have been buried at the church.

Richard III, the last king of the House of York, ruled England from 1483 to 1485, when was killed in battle during the War of Roses, an English civil war. He received a hasty burial at the Grey Friars monastery in Leicester as his defeater, Henry Tudor, ascended to the throne. Grey Friars was destroyed in the 16th century during the Protestant Reformation, and its ruins became somewhat lost to history. [Photos: The Discovery of Richard III]

A dig beneath a parking lot in Leicester last summer revealed the remains of Grey Friars and a battle-ravaged skeleton later confirmed to be that of Richard III. Excavators also found a handful of other graves, including this coffin, which the researchers think was put in the ground more than 100 years before Richard's burial.

This month, the team from the University of Leicester started a fresh excavation at the site. Now in their final week of digging, the researchers plan to open the coffin in the days ahead.

They think it might contain the remains of the knight Sir William de Moton of Peckleton, who died between 1356 and 1362, or one of two heads of the Grey Friars order in England, Peter Swynsfeld or William of Nottingham.

"Stone coffins are unusual in Leicester — and this is the first time we have found a fully intact stone coffin during all our excavations of medieval sites in the city," site director Mathew Morris, of the University of Leicester Archaeological Services (ULAS), said in a statement. "I am excited that it appears to be intact.

Morris and his team intend to measure and take photos of the coffin before they lift the lid, which they say they will do out of view of the media.

Meanwhile, Richard's remains are set to be reinterred next year. Last week, the Leicester Cathedral announced its $1.5 million (£1 million) plans to rebury the king in a new raised tomb at the church.