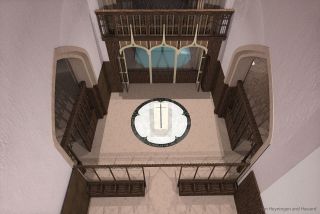 Plans are underway to reinter Richard III in 2014. An artist's impression of the king's tomb in the Leicester Cathedral.
(Image: © VHH)

The bones of England's King Richard III, discovered under a parking lot last summer, are set to be reburied in a fashion far more fitting for a king.

Debate still lingers over the medieval monarch's rightful gravesite, but officials in Leicester have announced plans to spend $1.5 million on Richard's reburial. This will include the costs of the ceremony and the construction of a raised tomb in the Leicester Cathedral to be surrounded by a new set of stained glass windows.

"We are committed to reinter King Richard with honour and we have listened carefully to the different views that were expressed," Dean of Leicester, David Monteith, said in a statement. "We want to create a really wonderful space in the Cathedral for him and the many thousands of people we know will want to come to visit and pay their respects." [Gallery: In Search of the Grave of Richard III]

After Richard died in battle in 1485, his body was buried in Leicester's medieval Greyfriars monastery, which was later demolished and obscured by development. Archaeologists with the University of Leicester uncovered the ruins of Greyfriars during a dig last summer. Richard's bones were found inside the remains of the church and a DNA analysis later revealed a match with a modern relative of the king.

Before the excavation even began, the U.K. Ministry of Justice had issued the university a license to remove Richard's remains, if found, and to decide where the bones should be reburied. From the outset of the dig, the university said nearby Leicester Cathedral would be its gravesite of choice.

Yet controversy has brewed over the reinterment plans, with some distant relatives and Richard enthusiasts arguing that the king should be buried elsewhere.

One of those groups, the Plantagenet Alliance, made up of about 15 people who claim to be relatives of the dead king, says Richard's body belongs in York, a city where the monarch spent about a third of his life. The group has asked for a judicial review of the University of Leicester's exhumation certificate, basing their argument on alleged human rights violations.

The university has refuted the Plantagenet Alliance's claims, saying that Richard is not believed to have any direct living descendants and that any distant relations are descended from the siblings of the king.

"Statistically speaking, many tens of thousands of individuals alive today are descended in this way," university officials said in March. They added that there is "no obligation to consult living relatives where remains are older than 100 years."

A spokesperson for the university told LiveScience that a judicial decision on that challenge is still pending. Dean Monteith expressed his hope earlier this week that the legal battle would be over soon.

"If this process was allowed to drag on for a very long time then it would become disrespectful," Monteith was quoted as saying by the BBC. "The remains of a human being can't simply be left unattended to, and in addition, these are the remains of an anointed king."

Leicester Cathedral officials hope their design for the new tomb will be accepted by the Cathedral Fabric Commission for England by November, a spokesperson for the diocese said. They are aiming to reinter Richard in May 2014, with a week of events leading up to the burial. The university's exhumation certificate had specified that any remains found must be reinterred by Aug. 31, 2014.

University of Leicester archaeologists are currently working on a fresh excavation at Greyfriars, hoping to learn more about Richard's lost resting place and the other people who were interred there.

Editor's note: This article was updated on Monday, July 22, at 12:30 p.m. ET to add information about the timeline of the planned reinterment.