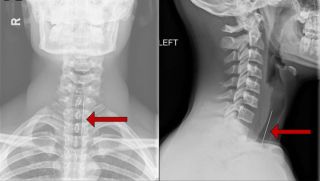 A 15-year old boy visited the emergency room after he inhaled a dart from a blowgun. Above, an X-ray showing the dart lodged in the airway.
(Image: © Reproduced with permission from Pediatrics, Copyright by the AAP.)

A 15-year-old boy in Ohio required a visit to the emergency room after he inhaled a dart from a homemade blowgun, according to a new report of his case.

The dart lodged in the boy's airway after he inhaled deeply while holding the blowgun in his mouth. Blowguns are designed to allow darts to be propelled outward by the force of an exhaled breath. The gun mostly consists of a narrow tube.

When he arrived at the emergency room, the boy had already been coughing for three hours. Although the boy said he had just been playing with his siblings — with no mention of the blowgun — X-rays of his airway revealed the dart. After further questioning, the boy admitted to using the blowgun.

The case highlights the potential dangers of blowguns for teens, especially when the blowguns are made by using instructions on the Internet, which the boy had done. Most websites that provide instructions regarding how to make blowguns do not adequately warn about the guns' risks, the researchers said. [See 9 Weird Ways Kids Can Get Hurt].

When a child inhales deeply (to produce a forceful breath to propel the dart forward), their vocal chords open fully, which makes it easier for objects to enter their airway, Jatana said.

The boy underwent a nonsurgical procedure  in which a tube is inserted down the throat to view objects in the airway, and the dart was removed. Despite inhaling a sharp object, the boy was not harmed by the ordeal, according to the case report.

Over the next three months, the doctors saw two more cases of teen boys (ages 14 and 15) who inhaled darts from homemade blowguns. In both cases, the darts were removed without complications.

But the three boys were all very fortunate not to have any serious complications, Jatana told LiveScience. Anytime an object is inhaled and trapped in the airway, it can be a life-threatening problem, he said. A dart could puncture a hole in the airway or lungs, or injure the voice box.

Because of their risks, blowguns should probably not be used by children or teens, Jatana said.

With the Internet providing easy access to blowgun instructions, such cases may become more common in the future, the researchers said.

As shown in this case, teens do not always tell the truth, which can complicate receiving a correct diagnosis. If a teen boy comes to the emergency room with vague respiratory symptoms, doctors should be suspicious that he may have inhaled something, the doctors wrote in their report. Symptoms of aspiration include difficulty breathing, coughing, wheezing and spitting up or coughing blood.

The report is published in the July 22 issue of the journal Pediatrics.