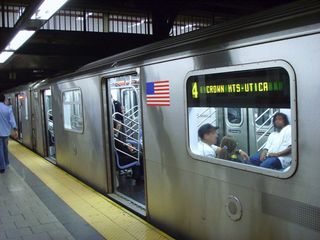 In the experiments, researchers release small quantities of harmless gases called perfluorocarbons, or PFCs, at various points within the subway system and on the street. Then, 200 air-sampling devices sprinkled throughout the city take measurements of the gas over specific intervals.

The project, run by Brookhaven National Laboratory on Long Island, aims to gauge the risk that a dangerous airborne contaminant, released by terrorists or by accident, could spread throughout the city’s subway system. The results will be used by the New York Police Department to help first responders decide, in the event of such a release, whether people should take shelter in place or evacuate.

“It’s not possible to predict where the air will go,” said Kay Cordtz, a press officer at Brookhaven. “These tests will give data which we can put into existing computer models,” to help first responders, Cordtz told LiveScience. [What Were the Worst Subway Attacks in History?]

The Subway-Surface Air Flow Exchange (S-SAFE) project, as it is called, is the first to study airflow both below and above ground in a dense urban environment.

The third and final test will be conducted sometime next week, depending on the weather. It can’t be raining while the test takes place, and the winds have to be average. The quantities of gas used are so small — on the order of a few parts per million, or the equivalent of about half a drop of water in a full bathtub — that if there’s no wind, the gases will dissipate before the samplers can detect them.

PFCs are present in the atmosphere at even smaller levels, of parts per quadrillion.

Hoax fliers have been posted around the subway system and online making false claims about supposed health effects of the PFC gases used in the study. The gases are in fact stable, inert, nonreactive and nontoxic even at much higher concentrations than those used in the study. In fact, doctors use PFC fluid to help develop the lungs of premature babies, in eye surgery and in medical imaging. Other chemicals in the PFC family are thought to be harmful to human health, but the study did not use these.

Previous airflow studies were conducted in New York City in 2005, but these only took place above ground. Similar studies have been conducted in Boston and Washington, D.C., but these were not as extensive as the current study, and are less applicable to New York.