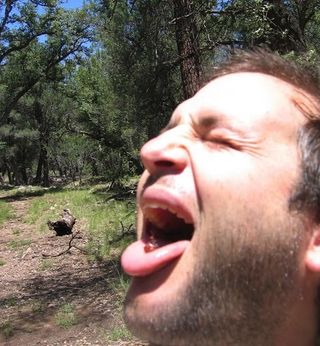 Joe Sapp, an ecology graduate student at the University of California, Santa Cruz, eats a honeypot ant. "They taste like candy," he said.
(Image: © Joe Sapp)

A tube of saggy, bacteria-filled flesh, the deep-sea tubeworm displays a uniquely unappetizing appearance. But marine biologist Peter Girguis and his colleagues tried a morsel anyway.

"We just took off a little piece and ate it raw," said Girguis, a professor at Harvard University. "It had the texture of hot dogs with match heads ground in," he said. Living next to hydrothermal vents that spew toxic water rich in heavy metals and sulfuric acid gives the worms an odd flavor. "If it weren't for the sulfur, who knows, they might even be tasty," Girguis told LiveScience.

Why would Girguis even try a tubeworm? A long-standing marine biology mantra holds that scholars should taste their species of study ... or at least waste not, want not. "It's been a tradition to eat animals that we study," Girguis said. "I figured that if we're going to drag the poor creatures up, I might as well leave no tissue to spare."

Marine biologist Win Watson recalls annual "Make a Dish from Your Animal" dinners at the Woods Hole Oceanic Institution in Woods Hole, Mass., during the 1970s and 1980s.

And though it wasn't intentional, Watson even shared his species with his dog. Watson brought home some bioluminescent ctenophores (comb jellies) to show his wife, then left them on the lawn. His dog ate them. "The most amazing barf I have ever seen," said Watson, a professor at the University of New Hampshire.

But tasting your research goes far beyond the field of marine biology. Scientists' natural curiosity has led them to put some strange things in their mouths. In the 1800s, scientists in Europe tried to eat every animal and bird they could import. Charles Darwin dined on all the species he described, including more than 40 tortoises. Technological advances mean today's scientists can sample Antarctic ice cores, ancient water, invasive species and toxic plants. [8 Strange Things Scientists Have Tasted]

At camps on sea ice, scientists drink their study subject, because there's no other source of freshwater, said Axel Schweiger, head of the Polar Science Center at the University of Washington. Terrie Williams, a professor at the University of California, Santa Cruz, recalls a gin and tonic made with Antarctic glacier ice.

Climate scientists who pull up ice cores stretching back 100,000 years regularly plunk broken core pieces into their drinks. The cubes fizz like soda as they melt, because of compressed gas bubbles trapped in the buried ice. "I actually made drinking glasses out of 40,000-year-old ice by hollowing out the inside of a waste core, a byproduct of the sampling we did," said Ed Brook, a professor of geosciences at Oregon State University.

As long as researchers are careful to avoid sections of ice laid down during years of nuclear testing, the oldest ice on Earth is pretty fresh and pure; it has lost its impurities through pressure squeezing. But the oldest water on Earth tastes terrible, Barbara Sherwood Lollar told the Los Angeles Times in an interview. Lollar and her colleagues discovered the 2.6-billion-year-old water in a mine in Ontario, Canada. The water had leached salt and iron from the surrounding rock and was more viscous than tap water, Lollar said.

Lollar is hunting for even older water, and old water is often very salty. A quick taste test is an easy way to check salt level. But geologists like Lollar also lick rocks. Tiny sediment grains (too small for the eye to see) can be sorted by your sensitive tongue into silt, clay or mud. A sample of that saliva can also help geologists get a good look at a rock with their hand lens, a portable magnifying glass.

Also in the nonedible category are toxic plants. Denise Dearing, a biologist at the University of Utah, studies how herbivores deal with toxins from plants such as creosote, juniper and alpine avens, a wildflower. "I usually taste all the toxic plants that my wood rats and pikas eat. They are usually unworthy of a second tasting," Dearing said.

Mammoth straddles the line between digestible and disgusting. The stories of people eating mammoth go back more than 100 years, but are more legend than truth. That's because the animals emerge from their icy tombs looking like furry, freezer-burned jerky, thanks to decomposition and multiple freeze-thaw cycles. At least one apocryphal but unconfirmed tale of mammoth eating comes from the National Geographic Explorer's Club annual dinner, and there are many unconfirmed reports from Russia. [Rattlesnake Sliders & Goat Penis: Photos of Exotic Food]

However, one true tale of a Pleistocene repast comes from the University of Alaska, Fairbanks. Paleontologist Dale Guthrie and colleagues, who excavated a 36,000-year-old steppe bison carcass called Blue Babe, stewed and ate extra neck tissue while prepping the bison for display. The meat was tough and had a strong aroma, Guthrie wrote in the book "Frozen Fauna of the Mammoth Steppe: The Story of Blue Babe" (University Of Chicago Press, 1989).

Eating insects might also fall into the "not good" category for many Western scientists. Of course, meals from bugs are neither new nor unusual outside of modern Western cultures. Thus, many researchers make an effort to overcome their fear of eating bugs when they travel.

"I felt both repulsed and attracted by the opportunity to chow down on our study organisms," said Nalini Nadkarni, an ecologist at the University of Utah. Nadkarni worked as a field assistant in Papua New Guinea during the 1970s, studying long-horned beetles (Cerambycids). The group's local assistants would collect beetle larvae during the day and roast them at night.

"They weren't terribly tasty, being gristly and fatty at the same time. But it did provide a good connection with our helpers. Sometimes, as a real treat, we ate the occasional fruit bats they caught. They would singe the fur off in the fire and then skin out the meat. Tasted like chicken," Nadkarni said.

On the brighter side, honeypot ants make an "out and out delicious" snack, according to Joe Sapp, an ecology graduate student at the University of California, Santa Cruz. "They are full of nectar and taste like candy," he said.

But pop into any in U.S. entomology department and one will find plenty of advocates for bug eating. "As a corn entomologist, one of my suggestions to corn growers who were plagued by insects was to eat them. Needless to say, that didn't go over well," said Tom Turpin, an entomologist at Purdue University in Indiana. So Turpin concocted corn fritters laced with European corn borers for an insect-cooking demonstration. [Edible Bugs to Help Fight World Hunger]

Turpin also enthusiastically eats raw insects. He recalls biting down on a raw grub for a TV show on eating insects — the cameraman fainted when juice squirted out. "After we revived him we did a second take, this time without incident," Turpin said. "This was before YouTube, but I'm sure that the first cut would have been a hit. I'm still disappointed the station did not air it," he said.

Also technically a bug eater is Barry Marshall, a Nobel Prize laureate. Marshall drank a culture containing the microbe H. pylori to prove the bacteria cause stomach ulcers. About three days later, Marshall developed a stomach ulcer, a step toward proving the link. His theory had been ridiculed by the scientific establishment. Marshal and collaborator Robin Warren won the 2005 Nobel Prize in medicine for discovering the link between H. pylori and peptic ulcer disease.

In case you feel the urge to emulate these scientists, remember, even self-experimenters like Marshall take care to practice common sense about what's safe. And no one is eating endangered or rare species.

"I'm actually not one to enforce the 'eat what you study' rule, mostly because we're usually working far out at sea, away from medical facilities, and we have no idea what sort of toxins or allergens might be present in poorly studied deep-living species," said Brad Seibel, a marine biologist at the University of Rhode Island.

He also studies, but has never nibbled, an Antarctic pteropod called the naked sea butterfly (Clione limacina), which makes a chemical "antifeedant" compound.

The reason why? "I've kept them in small glass chambers for experiments and have found that, if I don't clean the chambers very thoroughly after use, that the next animal I put in that chamber will die," Seibel said.