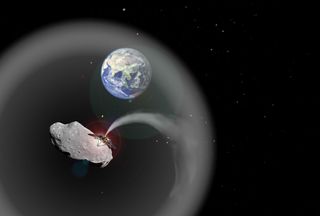 Scientists propose a dust cloud made of asteroid material could help to cool Earth. Here, an artist's depiction of what a spacecraft spewing asteroid dust might look like.
(Image: © Charlotte Lücking, based on images from ESA and NASA.)

Greenhouse gases are heating up the planet, spurring plenty of controversy about whether — and how — to stop pumping carbon dioxide into the atmosphere. But some scientists are looking at another option, one they often see as an emergency brake: Geoengineering.

The idea behind geoengineering is to combat man-made climate change with man-made solutions, mostly involving ways to pull carbon out of the atmosphere or to deflect the sun's rays so the carbon dioxide has less heat to trap. The ideas are largely untested and highly controversial. They also involve tackling major technological challenges, some of which may be too great to overcome.

"There's no point in pretending that it's the technology that is going to save the world when it might turn out to be completely impossible," said Hugh Hunt, a senior lecturer at Cambridge University who researches geoengineering. [7 Wild Weather Control Ideas]

Among the tech challenges and solutions under investigation are materials to withstand strong atmospheric winds, self-powered ships that can sail the seas while being steered by satellite and even space-based solar shields that would act as sunshades for the planet.

From a technological standpoint, the flashiest geoengineering scheme is space-based. By shooting small, reflective spacecraft into orbit, humans could theoretically mirror the sun's warmth back into space. (Another recent proposal would use asteroid dust to shield Earth from the sun.)

These orbital shields would ease climate change, because carbon dioxide and other greenhouse gases warm up the globe by trapping heat in the atmosphere. If less heat penetrates in the first place, there would be less to trap.

However, space-based schemes are the least likely to be implemented, said Ken Caldeira, a climate scientist at the Carnegie Institution for Science at Stanford University. Just to compensate for the rate of increase of greenhouse gases in the atmosphere, you'd have to build something like a square kilometer, or 0.4 square miles, of satellite area every half hour or so, Caldeira told LiveScience.

"The technical challenges are so formidable to put it off the table for the century," he said. [7 Ideas to Geoengineer Our Planet]

Slightly less dramatic, and more feasible, are schemes that would spray aerosols, or tiny particles, high in the atmosphere.

These aerosol plans are based on nature. Volcanic eruptions spew sulfur dioxide gas high into the atmosphere, which combine with water vapor and form light-reflecting particles. Just like the theoretical space shields, these particles keep Earth cool.

A variety of methods could be used to get these aerosols into the atmosphere, from spraying them out of airplanes to one plan that would use a balloon tethered by a 12.4-mile-long (20 km) hose pumping the particles into the stratosphere.

Hunt, who works on a balloon-aerosol research project known as SPICE (Stratospheric Particle Injection for Climate Engineering) said that the biggest question is whether it's possible to get enough particles into the stratosphere via a balloon-lofted hose to make a difference. Even if it is, he and his colleagues are dealing with dizzying challenges. The atmosphere is fairly calm 12 miles (20 km) up, Hunt said, but from the ground up to about 6 miles (10 km), it's very turbulent. The balloon has to be tough enough to travel through this bumpy region on launch and recovery, and the hose must be able to withstand the twisting and turning winds constantly.

"It's a bit like having an umbilical going down to a deep-sea diver," Hunt said. "The water is really still down at depth, but the ocean surface may have really big waves."

The team is looking at composite materials, including Kevlar, to make the hose lightweight and strong. They're also looking to engineer a hose that isn't circular, but rather wing-shaped and aerodynamic, so it catches the wind less.

Other challenges include building pumps to move aerosol particles 12 miles vertically. And the researchers would have to be able to track the movements of the hose to keep it out of the way of aircraft — a challenge complicated by the fact that tacking on GPS or other devices makes the hose more vulnerable to turbulence. Fortunately, Hunt said, digital camera resolution and computer processing have advanced to the point where using photography to track the hose can work, even though it will be practically invisible to the naked eye from a short distance away.

Moving lower in the atmosphere, one proposal would involve self-propelled ships spewing up fine sprays of seawater to brighten marine clouds. These clouds already play an important role in cooling the planet, said John Latham, an atmospheric scientist at the National Center for Atmospheric Research in Boulder, Colo. [Images: Amazing Clouds & How to Read Them]

"They reflect about half of the sunlight that lands on them," Latham told LiveScience. If that sunlight hit the ocean surface, only about 10 percent would reflect, he said.

By modifying these natural mirrors with very small droplets with a high surface area, researchers could possibly engineer the clouds to bounce back 55 percent to 60 percent of the sunlight that hits them, Latham said. Modern ships already do this to an extent, as the particulate matter let off when they burn fuel seeds clouds, increasing their brightness and creating visible tracks on satellite imagery where ships have been.

Instead of using polluting fuels to seed clouds, Latham's plan involves tiny droplets of filtered seawater. Edinburgh University researcher Stephen Salter has developed small vessels, which would be about 40 feet (12 m) long, powered by rotors driven by the wind. These Flettner vessels, named after their original developer in the early 1900s, would have underwater turbines to generate the electricity needed to turn seawater into a spray. Specialized filtration and nozzles would ensure that microscopic sea gunk like plankton didn't jam up the works. The ships would be steered by satellite, Latham said.

If carbon dioxide doubles from today's concentrations in the atmosphere — a situation most climate scientists agree would have major impacts — about 1,500 seawater-spewing Flettner vessels spaced 150 miles (241 km) apart could offset the warming, Latham said.

The ethics of geoengineering

There are other geoengineering proposals floating around, including the possibility of seeding the oceans with iron fertilizers to prompt phytoplankton blooms, which in turn take up carbon from the atmosphere and sink to the bottom of the sea. What all of these schemes have in common, however, is controversy.

Even scientists keenly interested in geoengineering tend to say they'd rather not see their ideas used.

"You'd only consider doing it if it was a real emergency and there was no other solution," Hunt said. "But I do worry we're getting close to that situation."

Even if the technical hurdles can be overcome, political and ethical issues might make geoengineering unfeasible. Even small-scale tests of geoengineering plans would be difficult to govern, said Alan Robock, a professor of environmental sciences at Rutgers University.

"There has to be some limitations on doing it so it doesn't just expand and get to a size that would be dangerous," Robock told LiveScience. What's more, he said, short-term weather and climate are so variable that it would be hard to tease out the effects of any geoengineering effects from the larger background of weather ups and downs.

Complicating the issue, a geoengineering test would almost certainly become a scapegoat for any bad weather occurring around the same time, Robock said. Even if there was no reason to suggest that a test caused, say, a drought, public outcry would be enormous.

"If your house is on fire, that is not the time to start designing a fire engine," Hunt said. "You'd like to think the fire engine had already been built and designed and tested before your house is on fire. Likewise if the Earth turns out to be in serious difficulty from climate change, at that point in time that's not the time to start looking at climate engineering. It'd be too late then."