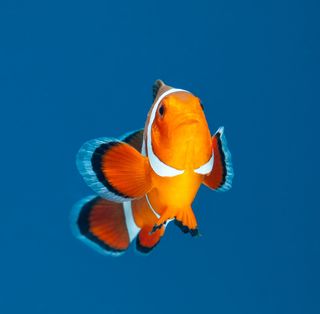 Damselfish are smarter than they may look.
(Image: © nicolas.voisin44 | Shutterstock)

Small fish may have small brains, but they're not stupid. A common coral reef fish called damselfish can learn to avoid predators from more experienced kin, even in complete darkness, new research shows.

Biologists have long known that fish use a variety of signals to warn others when predators approach, including visual cues, chemical cues, warning sounds and cues felt by motion. Until now, visual cues were thought to be an essential part of the mix. But new work from a team of biologists from Australia and Canada has shown otherwise, as reported today in the journal Proceedings of the Royal Society B.

Many fish can often detect an approaching predator by its distinct odor. Some are born hardwired to associate the smell of predators with danger, whereas others are born oblivious and must learn to make the connection. [See Images of Freaky-Looking Fish]

"Most prey fish are naive to predators; they don't really recognize them as something that is dangerous," said Doug Chivers, a biologist at the University of Saskatchewan in Canada and co-author of the new study. "But if you give them something that is frightening and a novel stimulus, they pair them together and learn that it is dangerous."

To test which combination of stimuli damselfish use for such "social learning" — or learning by the example of individuals — the team conducted a series of experiments involving pairs of experienced and naive fish (juveniles that weren't old enough to have learned predator-prey prowess). They placed the pairs in tanks containing the odors of a predatory guppy fish, and carried out tests in either dark or light conditions. When the experiments had concluded, they placed the naive fish in new, solitary tanks and introduced the guppy odor again. Regardless of whether they had learned in the light or the dark, most fish responded to the warning with more vigilant behavior.

"This is the first study to show this learning mechanism operating in darkness," said Grant Brown, a biologist at Concordia University in Montreal who was not involved in the study. The ability is especially relevant for coral reef fish, Brown pointed out, because they tend to live near the equator, where there is an average of 12 hours of darkness each day.

Having eliminated visual cues as essential to learning, the team tested whether solely chemical cues, which are emitted by experienced fish when prompted by an approaching predator, could teach a naive fish to recognize predators. They found these chemical cues were not enough, suggesting that a complicated mix of cues work together in damselfish. It remains unclear which single cue, if any, is most important.

The team plans to continue exploring different combinations of signals, with a special focus on the role of warning sounds. This work adds to a growing body of research showing that even seemingly simple organisms have developed complicated systems of cognition.