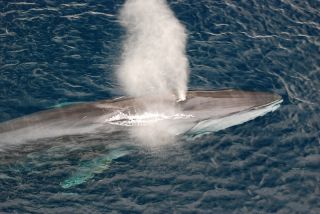 The fin whale is the second largest animal in the world, after the blue whale. It has been listed as endangered by the International Union for the Conservation of Nature in 2010.
(Image: © Juan Gracia | Shutterstock)

Icelandic whalers angered environmentalists around the world this month by resuming their hunt for the endangered fin whale — the second largest marine mammal after the blue whale. But the hunt may not threaten the population as terribly as some fear.

Two of the 184 fin whales permitted by this summer's quota have hit port so far last week, according to the Icelandic Directorate of Fisheries. For many whale conservationists, that's two too many for a species that the International Union for the Conservation of Nature listed as endangered in 2010. The Natural Resources Defense Council has drafted a public petition urging the U.S. government to impose economic sanctions on Iceland in response to the hunt, and groups around the world have taken similar action. An online petition addressed to the Dutch government has gathered more than 1 million signatures this month.

But Gisli Vikingsson, head whale researcher with Iceland's Marine Research Institute, argues the endangered species listing is misleading, and that this summer's hunt will not seriously threaten the mammal's vitality. Whereas the Southern Hemisphere fin whale population — which once constituted 80 percent of the world's population — suffered greatly from 20th-century commercial whaling and has failed to rebound, the North Atlantic population has grown in recent decades. [Images of Whales: Giants of the Deep]

"There are several fin whale populations in the world, although it is all called one species," Vikingsson told LiveScience. "The sole reason for the poor status of this species is the Southern Hemisphere."

"We have firm grounds to believe that there is an abundance, even using a precautionary approach," Vikingsson said.

Iceland has defied the wishes of whale conservationists since 1986, when the government refused to abide by the International Whaling Commission's global moratorium on whaling. They did instate a ban on commercial whaling from 1989 through 2006, but continued hunting for research purposes.

"Icelanders, we live from the resources of the sea," said Asta Einarsdottir, senior legal expert with the Icelandic Ministry of Fisheries. "So [whaling] is really part of our culture and tradition and our well-being."

The majority of the fin whales caught are destined for Japan, where the market has strengthened since the 2011 Fukushima disaster. In fact, fin whale hunting was cancelled in 2011 and 2012, primarily due to the economic downturn in Japan after Fukushima, The Guardian reports.

"This is done with much precaution, so we would never take the last whale," Einarsdottir told LiveScience. "It is of utmost importance to us."

Even so, many others consider whale hunting a gruesome industry. "Much of the whale meat within Iceland is eaten by curious tourists rather than locals. Tourists mistakenly believe that whale meat is just another 'traditional' Icelandic dish but instead, are helping to keep this cruel industry alive," according to a statement this month by the Whale and Dolphin Conservation (WDC).

The U.S. government also opposes commercial whaling. "We urge Iceland to honor the ban on commercial whaling and the international trade of whale meat," said Ryan Wulff, U.S. commissioner to the International Whaling Commission, according to the communications officer with the National Oceanic and Atmospheric Administration. "Iceland has developed a vibrant whale watching industry and is becoming quite an ecotourism destination, so it would be unfortunate if the decision to resume fin whaling had a detrimental effect on that momentum."