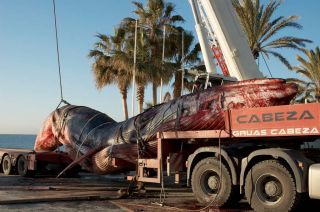 This is a fin whale which appeared stranded on the beach in Marbella (Spain) in 2008, the skeleton of which is on display in the National Museum of Natural Sciences in Madrid.
(Image: © Rjime31)

There are fewer fin whales in the Mediterranean Sea than previously believed, a new analysis shows, and the endangered species' survival is increasingly threatened by noisy humans.

Fin whales are the second-largest living mammals after blue whales and can reach up to 90 feet (27 meters) in length. They can be found lurking in oceans across the globe, even in the Mediterranean, though the new study published in Marine Mammal Science shows their numbers and distribution have been overestimated.

In 1991, the Mediterranean population of fin whales was estimated at 3,500, including whales found in the Strait of Gibraltar and the Alboran Sea, the westernmost parts of the Mediterranean between Spain and Morocco. But after analyzing 20,547 hours of recordings of whale songs in the region, researchers found that the fin whales in those western waters were actually just visitors from the Atlantic that swam into Mediterranean during a certain time of year, according to a statement from the Spanish Foundation for Science and Technology (FECYT).

"The population of Mediterranean fin whales presents a much more limited distribution than currently described, excluding a significant region of the western Mediterranean," said Manuel Castellote, lead author of the study with the National Oceanic and Atmospheric Administration.

A related study published in the journal Biological Conservation found that fin whales in the Mediterranean Sea and in the northeast Atlantic also modified the characteristics of their songs in response to increasing underwater noise pollution. A large group of whales was even displaced because of oil and gas exploration happening 177 miles (285 kilometers) away from the study site, according to FECYT's statement.

Of marine mammals, whales have the greatest acoustic sensitivity at low frequencies, and their songs can be drowned out by the undersea noise of maritime traffic and geophysical exploration. Since the effectiveness of a whale's song is linked to successful mating, Castellote explained, "the noise generated through human activity in the oceans leads to possible chronic effects on the health of this species."