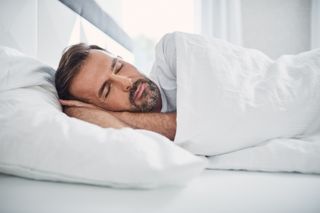 A doctor told a courtroom this week in Los Angeles that Michael Jackson went without "real" sleep for 60 days leading up to his death. The testimony raises questions about how long a person can survive without shut-eye, and whether it matters what type of sleep a person slips into when they snooze.

Jackson had been receiving nightly infusions of propofol, a surgical anesthetic, for two months to treat his insomnia as he prepared for a series of comeback shows.

Even if the drug made Jackson feel well rested, it would have sent him into a rather superficial slumber each night, said Dr. Charles Czeisler, a Harvard sleep scientist who testified at the trial against the pop star's concert promoter this week, according to CNN. [Top 10 Spooky Sleep Disorders]

Czeisler reportedly told the courtroom that propofol suppresses rapid eye movement (REM) sleep. If Jackson hadn't died primarily of an overdose of the anesthetic (and another sedative) on June 25, 2009, the lack of REM sleep may have eventually killed him, Czeisler said.

"It would be like eating some sort of cellulose pellets instead of dinner," Czeisler was quoted as saying by CNN. "Your stomach would be full, and you would not be hungry, but it would be zero calories and not fulfill any of your nutrition needs."

While sleep deprivation over time has been linked to obesity and chronic diseases, such as diabetes and breast cancer, it's difficult to pin those side effects on a specific aspect of sleep, and not all scientists agree that REM sleep has crucial restorative powers in itself.

"There's no evidence that REM sleep deprivation by itself will kill anyone," Dr. Jerome Siegel, professor of psychiatry at UCLA, told LiveScience.

REM sleep is characterized by heightened brain activity and is the state when dreams are at their most intense. The phase is thought to originate in the area at the base of the brain called the pons. Oftentimes damage to this critical part of the brain spells death. However, there are some cases of people who have survived an injury to this region and are living normal lives, but without ever experiencing REM sleep again, said Siegel, who is also affiliated with the VA Greater Los Angeles Healthcare System.

Israeli researcher Peretz Lavie followed a patient who had lost REM sleep after a brain injury. The man went to law school and became the puzzle editor for Tel Aviv newspaper.

And if it's true that a lack of REM sleep can kill you, then no one should be taking MAOIs and SSRIs, common classes of antidepressants, Siegel said; these drugs have been known to inhibit the dream-making state of slumber.

The Jackson case does underscore what little scientists know about the purpose of sleep, let alone a specific phase. One thing researchers do know is that people are more alert when they wake up from REM sleep.

"You can see an evolutionary advantage for having this state that allows you to be alert when you're awakened," Siegel said.

How long can you stay awake?

Randy Gardner holds the record for the longest a person has ever voluntarily gone without sleep, staying awake for 264 hours (about 11 days) when he was 17 for a school science fair project in 1965.

No person has ever definitively died from lack of sleep alone, and it's ethically dicey to explore those boundaries in the lab. Last year, a 26-year-old Chinese man attempting to watch every game of the European Cup reportedly died after staying awake for 11 days. Reports at the time suggested he was drinking alcohol and smoking throughout the sleepless soccer-watching binge, making it difficult to rule sleep deprivation the primary cause of death.

In famous experiments in the 1980s at the University of Chicago, scientists kept rats from sleeping by jolting them awake every time they nodded off. The animals consistently died within two weeks, but Siegel thinks their deaths may have had more to do with the surge of the stress hormone cortisol and increase in blood pressure every time they were woken up than the sleep deprivation.

"What they're dying of is being repeatedly awakened which is quite different from sleep deprivation," Siegel said. "If you stay up all night, none of this happens."