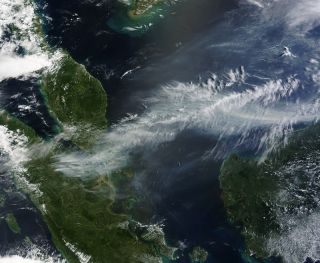 Wildfires burning on the Indonesian island of Sumatra have sent a choking haze over Singapore, pushing air pollution to record levels.

"For the next few days the current dry weather and wind conditions are likely to continue. Hazy conditions are thus expected to persist," read the latest update from the country's National Environment Agency.

The wildfires behind the haze have been linked to illegal slash-and-burn land clearance in Indonesia. Environmental officials from both Singapore and Indonesia have been in emergency talks in Jakarta, but the smog situation seems to have created some diplomatic tension between the two nations.

"This is now the worst haze that Singapore has ever faced," Vivian Balakrishnan, Singapore's environment and water resources minister, said in a statement Wednesday. "And no country or corporation has the right to pollute the air at the expense of Singaporeans' health and well-being."

Indonesia's minister for people's welfare, Agung Laksono, hit back at Singapore for "behaving like a child" over the matter and even implied that foreign palm oil companies, even ones from Singapore, could be in partly to blame for the fires, the BBC reported.

Early Friday, Indonesian authorities dispatched two helicopters with cloud-seeding equipment to Riau province to try to trigger rainfall over the fires burning across the carbon-rich peatland, according to AFP.