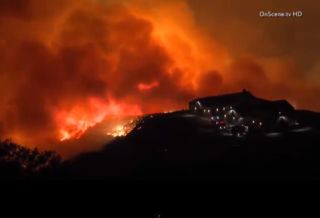 Frances Beinecke is the president of NRDC, served on the National Commission on the BP Deepwater Horizon Oil Spill and Offshore Drilling, and holds a leadership role in several environmental organizations. She contributed this article to LiveScience's Expert Voices: Op-Ed & Insights.

The fires burning around Colorado Springs, Colo., in the past week have been called the worst in the state's history. Nearly 40,000 people were forced to evacuate their houses and two people lost their lives in the flames.

Resident Tim MacDonald told the Los Angeles Times that his wife had just 10 minutes to flee their home when she saw a curtain of black smoke swing toward them. She grabbed her son and her dogs and left as fast as she could. The MacDonalds later learned their house was one of 485 burned to the ground. In some areas, Sheriff Terry Maketa said it "looks like a nuclear bomb went off."

The West is no stranger to wildfires, but in recent years, climate change has packed many fires with greater intensity. Warmer temperatures and drier conditions are contributing to longer fire seasons and bigger blazes. Those trends mean more evacuations, more destroyed homes, and more deadly risks for residents and firefighters.

What does climate change mean in your community?

You may have witnessed strange weather in recent years, but aren't sure how it is tied to larger patterns or record-breaking events. NRDC has released a new mapping tool that allows you to enter your ZIP code and learn what climate disruption is doing to your hometown.

Maybe you live in the Northeast like I do, and have see homes and businesses flooded by severe downpours in 2010, Hurricane Irene in 2011, and Superstorm Sandy in 2012.

Maybe you live in one of the more than 2,500 counties declared a disaster area in 2012 because of the worst drought since the Dust Bowl.

Maybe you live in one of the cities stretching between Brownsville and Baltimore that wilted in last summer's heat wave. July was the hottest month on record for the contiguous United States and more than 120 deaths were directly tied to high temperatures.

No matter where we live, climate change is making its presence known. For even if your community hasn't been hit by a severe storm or drought yet, you still pay a price: The government spent nearly $100 billion to respond to last year's extreme weather events. That's more than $1,100 per average U.S. taxpayer.

Our communities — and our budgets — cannot continue to bear the burden of unchecked climate change.

We must become more resilient in the face of climate disruption. Tracking new weather patterns can help residents, businesses, and government officials better prepare. I recently spoke at a conference hosted by Sen. Sheldon Whitehouse (D-R.I.), where we discussed how some Rhode Island towns are already buying out buildings in floodplains and assessing what sea-level rise will mean for public infrastructure such as ferry terminals. Local officials around the country are taking similar steps.

But, even as we plan for extreme events, we must also tackle the root causes of climate change. President Barack Obama got us moving down this road when he issued new fuel economy standards that will cut carbon emissions from new cars in half by 2025. Now it's time for a national push to curb global warming pollution.

Six months ago, Obama said at his second Inauguration, "We will respond to the threat of climate change, knowing that failure to do so would betray our children and future generations." He echoed those words in his State of the Union address in February. Public reports are now indicating that the president will make an announcement on climate change sometime in the next few weeks. The NRDC is looking forward to hearing his plan, which needs to include cutting carbon pollution from new and existing power plants.

Americans are looking to Obama for leadership. Last week, five senators from the states most affected by Superstorm Sandy called on the president to reduce carbon pollution from new and existing power plants. Those senators represent people who felt the destructive power of extreme weather firsthand. They want to ensure the United States is using the weapons they have to fight the threat of climate change.

Research has shown that cutting carbon pollution from power plants and reducing our society's dependence on dirty fuels can help shield our communities from the worst of this kind of destruction. Waiting to put these solutions in place is like waiting to flee a fire. The time to act is now.

NRDC has set up a site for the public to send a message to President Obama to issue a clear and effective climate action plan.

Read Beinecke's most recent Op-Ed: Why the Bering Strait Is Under Siege.