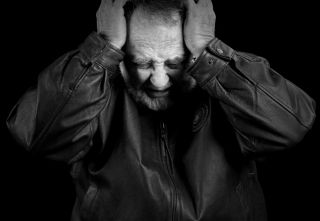 Photo of a man in anguish.
(Image: © Cheryl Casey | Shutterstock)

Nearly one in four people who suffer a stroke experiences symptoms of post-traumatic stress disorder (PTSD) during the year following the event, according to a new study.

The study also found that one in nine patients develops chronic PTSD more than a year later.

The findings suggest that about 300,000 patients in the United States yearly may develop PTSD symptoms related to stroke, said lead author Donald Edmondson, an assistant professor of behavioral medicine at the Columbia University Medical Center in New York.

"Patients, caregivers and doctors need to be aware that PTSD after a life-threatening event, such as a stroke, is quite common," Edmondson told LiveScience.

"PTSD is not just a disorder of combat veterans and sexual-assault survivors, but strongly affects survivors of stroke and other potentially traumatic acute cardiovascular events as well," Kronish said in a statement.

These findings suggest health care providers should actively screen for depression, anxiety and PTSD among stroke patients, the researchers said.

This study calls attention to a health risk that has not been fully appreciated, and the study is likely to shift doctors' thinking, said Dr. Deepak Bhatt, a professor of medicine at Harvard Medical School in Boston who was not involved in the new study. "While it is known that depression can occur after a stroke, PTSD after a stroke is not something that has been on most doctors' radar," Bhatt said.

The researchers looked at nine clinical studies, which included 1,138 people who had suffered a stroke, or a transient ischemic attack (sometimes referred to as a mini-stroke). The researchers considered patients' symptoms to determine if patients were experiencing PTSD, rather than severe forms of anxiety or depression.

"We were pretty strict when it came to what we considered a positive screening for PTSD," Edmondson said. "There had to be enough symptoms where we would believe that if the patient had a diagnostic interview, they would more than likely meet the criteria for PTSD."

PTSD is an anxiety disorder triggered by exposure to a traumatic event, and its symptoms are fairly well-defined and treatable, Edmondson said. Patients with PTSD commonly have persistent nightmares, avoid reminders of the traumatic event and suffer from an elevated heart rate and high blood pressure.

Still, more research is needed to understand the true prevalence of PTSD in stroke survivors and the potential consequences of the psychological disorder, Edmondson said.

With a better understanding of the nature of PTSD in stroke survivors, researchers could begin to investigate ways to manage its psychological effects.

According to the Centers for Disease Control and Prevention, more than 795,000 people in the United States suffer a stroke each year, and it is the fourth-leading cause of death in the country.

"Hopefully, this study will lead to further research to see if there is anything that can be done to make these patients feel better, or maybe even prevent PTSD from developing," Bhatt said.

The detailed results of the study were published online today (June 19) in the journal PLOS ONE.