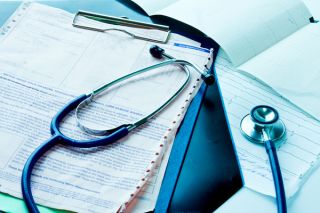 Dr. David Troxel is medical director and secretary of the board of governors of medical malpractice insurer The Doctors Company and chairman of the company's foundation. He is also clinical professor emeritus at the University of California, Berkeley and past president of both the American Board of Pathology and the California Society of Pathologists. He contributed this article to LiveScience's Expert Voices: Op-Ed & Insights.

Few would argue with the notion that health care reform will result in huge changes in the way physicians practice and patients receive care. But on the front lines, doctors themselves possess unparalleled insight into how these shifting sands will impact their own ranks — and that awareness inspires dread in many of them.

Combined with an aging population, the influx of nearly 32 million newly insured people into the U.S. health care system by 2016 — a direct result of the Affordable Care Act — will lead to an unavoidable consequence: a shortage of primary-care physicians, the doctors we see when we have the flu or need to monitor chronic illnesses such as diabetes .

These are our nuts-and-bolts physicians who perform an important and valuable role, and there simply won't be enough of them to go around. This looming shortage will inevitably challenge an already-taxed health care system and alter the way physicians and patients interact by raising the doctor-to-patient ratio and straining patient outcomes.

Primary physicians who practice in groups are typically expected to see four patients per hour — one every 15 minutes — and this number will likely increase due to cost and productivity pressures to wring even more work from fewer doctors. Unfortunately, this trend will be accompanied by continued downward pressure on their incomes. Few physicians are earning as much today as they did even five years ago, and primary-care physicians have been affected more than specialists in this regard. Additionally, the shift from a fee-for-service to a bundled fee-for-performance reimbursement system — while still in transition — will lead primary-care doctors who practice solo or in small groups into larger group practices.

The nation's physicians have deciphered the handwriting on the wall and are, unsurprisingly, alarmed. In 2012, The Doctors Company, the nation's largest physician-owned medical malpractice insurer, released results from a survey in which more than 5,000 physicians across the nation commented on the future of health care reform . Sixty percent of respondents indicated that the pressures to increase patient volume will negatively impact the level of care they can provide. Fifty-one percent felt their ability to grow and maintain patient relationships will be adversely affected. And nine out of 10 physicians are so disillusioned by those concerns that they actively discourage friends and family members from pursuing careers in medicine.

This is shocking confirmation of what we already knew, and I believe those statistics would perhaps be even higher if the same survey questions were asked today. While many of the newly insured patients entering the health care system will obtain their insurance coverage through state-run exchanges, some will be unable to afford even a discounted policy and will, out of necessity, receive their coverage through Medicaid. For years, Medicaid has been reducing payments to primary-care physicians to well below customary charges, and we can only expect these rates to fall further.

Why, then, would young doctors who have just finished medical school with an average debt of $175,000 find the idea of becoming a primary-care physician attractive? Why would they sign on to earn — in all likelihood — less than $150,000 per year? The reality is that many won't. It's far more enticing to become a better-paid specialist, and this simple fact adds to all the other aforementioned reasons we won't have enough of these important doctors.

Who will fill in the gap? Inevitably, nurse-practitioners and physician assistants, who are qualified to provide many preventive-care services and can play a significant role in chronic-disease management, by taking blood pressure readings or ordering and interpreting blood-sugar levels. When physicians have only 10 or 15 minutes to see a patient, they'll have no choice but to delegate responsibilities to those professionals, who are able, in most states, to practice under the supervision of a physician.

Already, however, legislation in several states seeks to extend these professionals' autonomy by allowing them to practice independently of physicians, but under certain protocols. Obviously, this legislation will be controversial, but my personal suspicion is that in order to increase the productivity of primary-care physicians, nurse-practitioners and physician assistants will ultimately be given more responsibility.

Unquestionably, the doctor-patient relationship will change. The days of 45-minute doctor appointments are gone, along with the rapport that can be established in such relationships. But does that mean the quality of medical care will plummet? Despite all of these seemingly doom-and-gloom scenarios, I'm optimistic that's not the case. I'm hopeful that if health care reform works as planned, the quality of care may well improve — and that the new performance measurements of patient outcomes will document this.

No one likes change, and we're in the midst of a maelstrom now. To me, it has always been obvious that the health care system had to change, and the gradual evolution to improve patient outcomes cost-effectively began well before President Barack Obama undertook the Affordable Care Act.

You simply can't change a system that accounts for 17 percent of the nation's gross domestic product overnight. But whether you agree or disagree with the president's initiative, most of these changes are driven by economic considerations. The horse has left the barn, as they say, and the cost concerns of both government and business won't let the beast back in. As long as we focus on the ultimate goal — better, more affordable patient outcomes — there's no reason to deviate from a can-do attitude.

These comments are those of the author, and do not reflect the official position of The Doctors Company or the publisher. This article was originally published on LiveScience.com.