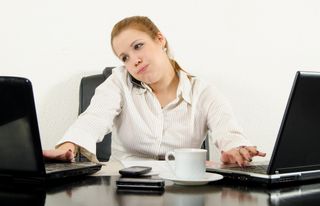 It may not be uncommon to see someone typing out an email on their phone as they walk down the street, listen to music as they read the newspaper on the subway, or stare at a computer screen with multiple windows and tabs open. But despite constantly juggling different activities, humans are not very good at multitasking, experts say.

Dividing attention across multiple activities is taxing on the brain, and can often come at the expense of real productivity, said Arthur Markman, a professor in the department of psychology at the University of Texas at Austin.

"There's a small number of people who are decent multitaskers — this concept of a 'supertasker' — but at best, it's maybe 10 percent of the population, so chances are, you're not one of them," Markman told LiveScience. "The research out there will tell you that there are a couple of people who are good at it, but it's probably not you." [The 10 Most Destructive Human Behaviors]

But if practicing an instrument can improve a musician's performance, can the same be done to a person's brain to train it to be more effective at multitasking? Psychologists say it's unlikely, because multitasking involves actively thinking about more than one thing at a time, which can overload the brain's working memory.

"Human beings have a limited capacity for information processing, so after a point, it's not clear if we're capable of doing more," said Gloria Mark, a professor in the department of informatics at the University of California, Irvine. "It's possible that there is a learning curve, and people could train themselves to be better at multitasking, but most people won't be able to sustain that over long periods of time."

Mark has done extensive research on multitasking in the workplace to determine how frequently people switch from one task to another, and how this process affects employees' mood and stress levels.

The researchers found that on average, people switched activities every three minutes throughout the day.

"They weren't spending very long periods of time focusing on just one thing," Mark said. "In our interviews, many people complained that they were feeling burned out and stressed, which is one of the reasons we started using heart rate monitors, because we wanted to find out to what extent this was really true. As it turns out, we have been able to measure stress." [11 Tips to Lower Stress]

And while tackling more than one thing at a time may seem like an efficient way to manage a full workload, multitasking may not be the most effective way to get everything done, said David Meyer, a professor of psychology at the University of Michigan in Ann Arbor, and director of the school's Brain, Cognition and Action Laboratory.

"There are some cases where it may be possible to do what we call 'perfect time-sharing,' but this typically happens when each of the two tasks are pretty routine," Meyer told LiveScience.

Humans are typically good at balancing tasks that use unrelated mental and physical resources, he explained. For instance, most people are able to fold laundry and listen to a weather report on the radio without too much trouble.

The brain is designed to handle multitasking when actions or activities are so familiar they have become habits, Markman said. This is why when a toddler is learning how to walk, each movement requires intense concentration, but adults generally have no trouble walking while carrying on a conversation.

"We have these brain mechanisms in the frontal lobe that I like to call the 'stop system,' because when we're switching between tasks, they help us stop what we're doing and engage, or re-engage, in something else," Markman said. "But when something is a habit, we can repeat it without thinking too much about it."

Yet some tasks, no matter how many times we perform them, require too much engagement and active thinking to become truly habitual. This is why it is never a good idea to use a cellphone while driving, Meyer said, and why the notion of a "supertasker" remains largely fiction.

"There will always be individual differences — some people will be better than others — but you can train yourself until you're blue in the face, and as long as you're performing complicated tasks that require the same parts of the brain, and you need to devote all that capacity for these tasks, there just aren't going to be resources available to add anything more," Meyer said.