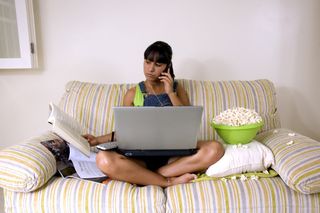 Multitasking is an increasingly popular phenomenon in today's digital world. Multiple lines of research show, however, it doesn't really make a person more productive. Even so, people still do it because it makes them feel good, new research suggests.

When people try to read and watch TV at the same time, their brains work overtime, scientists say. As such, tasks like reading a textbook chapter as homework take longer when done with other distractions, like a TV show or a constantly beeping phone, for instance. For some reason, though, we still try to multitask.

"There's this myth among some people that multitasking makes them more productive," study researcher Zheng Wang, from the Ohio State University, said in a statement. People get positive feelings from some of the tasks they are doing while multitasking, the researchers found, "but they seem to be misperceiving the positive feelings they get from multitasking. They are not being more productive — they just feel more emotionally satisfied from their work."

Previous studies of multitaskers have found that when people try to juggle multiple tasks, they generally perform worse on them, no matter their age. Just because a young adult grew up texting, surfing the Internet and watching TV all at the same time, doesn't mean they are more capable of dealing with the cognitive load involved.

The researchers studied the media use of college students for a month using a personal reporting device similar to a cell phone. They had the participants note all the media they used, and what they got from their media use regarding productivity and emotional benefit. When students were multitasking, they showed a greater emotional boost, even when their time working wasn't as productive.

"They felt satisfied not because they were effective at studying, but because the addition of TV made the studying entertaining," Wang said. "The combination of the activities accounts for the good feelings obtained."

Because multitasking is associated with this enjoyment of other media while trying to work, they associate these positive feelings with multitasking, even though it's related to fewer work-related accomplishments. This could lead to a downward spiral, the researchers warned.

"If you multitask today, you're likely to do so again tomorrow, further strengthening the behavior over time," Wang said. "This is worrisome because students begin to feel like they need to have the TV on or they need to continually check their text messages or computer while they do their homework."

The study was published April 25 online in the Journal of Communication.