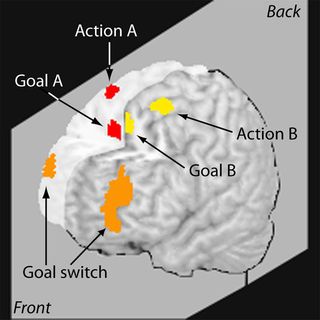 When humans pursue two goals A and B concurrently, the two frontal lobes divide for representing the two goals and related actions simultaneously. The anterior most part of the frontal lobes enables to switch back and forth between the two goals, i.e. executing one goal while maintaining the other one on hold. This inter-hemispheric division of labor explains why humans appear unable to accurately carry out more than two tasks at one time.
(Image: © Etienne Koechlin, INSERM-ENS, Paris, France, 2010.)

For those who find it tough to juggle more than a couple things at once, don't despair. The brain is set up to manage two tasks, but not more, a new study suggests.

That's because, when faced with two tasks, a part of the brain known as the medial prefrontal cortex (MFC) divides so that half of the region focuses on one task and the other half on the other task. This division of labor allows a person to keep track of two tasks pretty readily, but if you throw in a third, things get a bit muddled.

"What really the results show is that we can readily divide tasking. We can cook, and at the same time talk on the phone, and switch back and forth between these two activities," said study researcher Etienne Koechlin of the Université Pierre et Marie Curie in Paris, France. "However, we cannot multitask with more than two tasks."

The results will be published this week in the journal Science.

Multitasking in the brain

The MFC is thought to be part of the brain's "motivational system." Specifically, it helps monitor the value of rewards and drives a person's behavior according to that value. In other words, it's where rewards are represented in the brain.

Scientists knew that a region at the very front of the brain, called the anterior prefrontal cortex (APC), was involved in multitasking . But they weren't sure how the MFC was involved. Are the rewards for the different tasks represented separately? Or summed together?

Koechlin and his colleagues had 32 subjects complete a letter-matching task while they had their brains scanned with functional magnetic resonance imaging (fMRI). The subjects saw uppercase letters on a screen and had to determine whether those letters were presented in the correct order to spell out a certain word. They were given money if they performed the task with no errors.

The researchers saw that, the higher the monetary reward, the more activity there was in the MFC.

Essentially, the brain behaved "as if each frontal lobe was pursuing its own goal," Koechlin said.

To make things even more complicated, the researchers introduced a third letter-matching task. Here, they saw the subject's accuracy drop considerably. It was as though, once each hemisphere was occupied with managing one task, there was nowhere for the third task to go.

"[The] subjects perform as if they systematically forget one of the three tasks," Koechlin told LiveScience.

The results might also explain why humans seem to have a hard time making decisions between more than two things, Koechlin said.

Previous work has indicated that people like binary choices, or decisions between two things. They have difficulty when decisions involve more than two choices, Koechlin said. When faced with three or more choices, subjects don't appear to evaluate them rationally; they simply start discarding choices until they get back to a binary choice.

This is perhaps because your brain can't keep track of the rewards involved with more than two choices, Koechlin said.