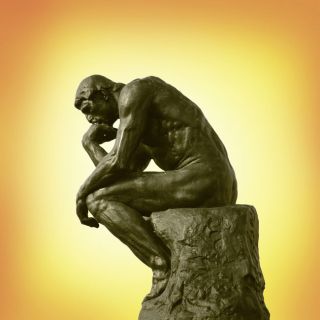 "The Thinker" is a sculpture by Rodin.
(Image: © Dreamstime)

People who are walking disaster areas—the types who bounce checks monthly, miss flights and vomit on the boss at the company picnic—are the same people who have poor reasoning skills, new research shows.

Reasoning abilities are influenced by intelligence and socioeconomic status, but they may also be skills that can be learned and honed with practice, says a "decision scientist" at Carnegie Mellon University in Pittsburgh.

Many people are affected by the way that information is framed, marketed or spun, as in advertisements, thereby exhibiting poor decision-making skills, says Wändi Bruine de Bruin. But people with strong reasoning skills make the same choices no matter how information is presented to them.

Her research, set to be published in the Journal of Personality and Social Psychology, shows a scientific link between people who are their own worst enemies and reasoning skills, although it is still unclear if the thinking problem causes the social incompetencies.

Reasoning in the real world

Research on decision-making relies on tests that present people with hypothetical situations and ask them to imagine what they might do. Some scientists have pointed out, however, that there is little evidence that a person’s performance on these hypothetical tests has any real world meaning.

So Bruine de Bruin and her colleagues designed a study to determine whether these tests actually say something meaningful about the quality of the decisions people make in their everyday lives.

> Then the researchers asked the subjects about their real-life experiences and how frequently they ended up in bad situations—such as having spent the night in jail or racked up credit card debt. People who performed better on the hypothetical reasoning tests were, in fact, less likely to end up in bad situations.

“Performance on those hypothetical paper-and-pencil tasks is related to the decision outcomes people experience in their lives,” she said.

Bruine de Bruin’s study also looked at how different factors, such as intelligence and socioeconomic status, affect decision-making. She was surprised to find that, although these variables affect how well a person reasons, they don’t explain it entirely—reasoning appears to be a separate skill.

In other words, “smart people don’t automatically make good decisions,” said Eric Johnson, a professor at the Columbia Business School, who was not involved in the study.

If reasoning is a distinct skill, then a big question is whether it can be taught. Bruine de Bruin hopes to answer this question by teaching people better reasoning skills and following them over time to see how their lives change.