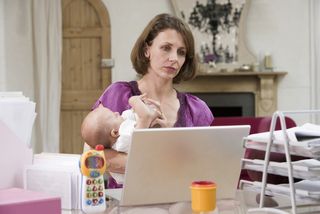 The stereotype of the busy working mom divvying up her energy between kids, husband and housework is at least partially true, according to new research that finds that not only do mothers multitask more than fathers, they're less happy doing so.

The study, published today (Dec. 1) in the journal American Sociological Review, finds that working mothers spend about 10 hours a week more multitasking than do working fathers. While dads are more engaged than ever in home life, the research reveals that moms still shoulder a heavier burden, said study researcher Barbara Schneider, a sociologist at Michigan State University.

"Moms today who work full time basically have to worry about working full time and being a mom and a spouse," Schneider said. "It makes it very difficult."

Multitasking may feel productive, but psychological research suggests our brains aren't at their best when divided between two or more tasks. One 2010 study published in the journal Science found that the brain can juggle two tasks at once, but adding a third is a recipe for disaster. Even practiced multitaskers struggle with the overload. According to research by Stanford University professor Clifford Nass, the people who multitask the most are the worst at it.

But for modern families, multitasking is a way of life. Schneider and her colleagues wanted to know how much time moms and dads spend doing two or more things at once, and just as important, how they felt about it.

As part of a large 1999-2000 study of mostly middle-class families called the 500 Family Survey, researchers asked parents to wear pre-programmed wristwatches that would beep eight times each day. When the participants heard the beep, they stopped everything to record in a diary what they were doing, whom they were with, and their emotions at the moment. This method, called "experience sampling," was developed by Hungarian psychologist Mihaly Csikszentmihalyi.

"What we're really learning is not only how people are spending their time, but how they're feeling about it at a very deep and personal level," Schneider said.

"Basically, that's telling you that when dads are at home and they multitask, they pretty much are thinking it's a good thing," Schneider said. "This is less so in the case of moms."

The results highlight the stress that middle-class families face in the modern work force, Schneider said.

"We have 21st-century workers, and it's very difficult," she said. "The problem is that workplaces are really 20th century. We still have pretty much the same kind of work week, the same work expectations. … We've got to think about more flexible work arrangements."