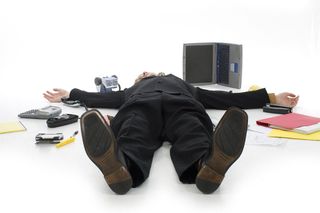 Given the ever-growing array of digital distractions available, multitasking is more prevalent than ever. Unfortunately, experts say, our brains weren't built for this onslaught.
(Image: © Dreamstime.)

Quick: How many Internet browser tabs do you have open while reading this article? Chances are good that it's more than one. Chances are also good that you're chatting online, checking your text messages and maybe keeping half an eye on the television as you read these words.

Given the ever-growing array of digital distractions available, multitasking is more prevalent than ever. Unfortunately, experts say, our brains weren't built for this onslaught. The price is attention overload that leaves us foggy-brained and less productive than before. [Digital Overload: Too Much Technology Takes a Toll]

In multitasking, "there are only disadvantages," Stanford University communication professor Clifford Nass told LiveScience. "There's nothing good about doing it."

Our ability to carry out complicated tasks like reading and reasoning lie in a brain process called working memory. Short-term memory, attention and cognitive control all come into play in keeping our brains on the ball as we take in and manipulate information.

But all of these processes have their limits. So while multitaskers might believe they're listening to a podcast while texting a coworker, the brain can't actually handle that sort of simultaneous processing, said Nass, the author of "The Man Who Lied to His Laptop: What Machines Teach Us About Human Relationships" (Current Hardcover, 2010).

"When we're trying to do that, our brain is rapidly attempting to switch back and forth from one activity to the other," he said. "That turns out to be extremely difficult."

"Basically, they're lousy at all aspects of multitasking," Nass said.

Step away from the Internet

One thing is for sure: The lure of multitasking is almost irresistible. Our brains seek novelty, said Joanne Cantor, an emerita professor at the University of Wisconsin at Madison and author of "Conquer CyberOverload: Get More Done, Boost Your Creativity, and Reduce Stress" (CyberOutlook Press, 2009). Computers and mobile devices exploit that novelty-seeking instinct, she said.

"Every time we hear a click or something pops up, it's extremely hard not to wonder 'What's in that?'" Cantor told LiveScience.

Unfortunately, shifting attention every time your e-mail client alerts you to a message can be exhausting.

"It is cognitive work," Nass said. "It's a lot of work to switch tasks. It's much less work on the brain to do one thing and then a second thing."

That's when the productivity blessing of computers and the Internet becomes a curse, Cantor said.

"It's important to know when you're brain is just, I don't know, fried," she said. "The best thing to do then is to take a break, and to take a break to a low-information environment."

That means no clicking through every post on your favorite blog. Step away from the computer, Cantor advised, take a walk to boost blood flow to your brain, and treat yourself to a soothing view of nature, if possible.

"It's hard, but one of the things I suggest is that you just try it in small doses and see how much more effective you are," Cantor said.

Technology has made it possible to do "a zillion activities at once," Nass said, and people are starting earlier than ever. His lab is now researching those who start multitasking as children or teens. He's also collaborating with brain imaging researchers to find out what brain areas get triggered when we multitask.

One thing that's not so easy to study is what happens when people quit multitasking cold turkey.

"I tried that once at Stanford, where I offered $100 for people to stop multitasking for a week," Nass said. "I couldn't get anyone to do it."