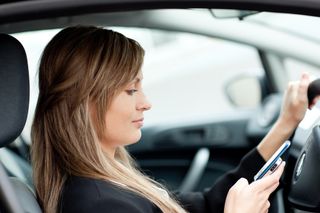 Just a three-second distraction, such as glancing at a phone, can double mistakes, a new study finds.
(Image: © wavebreakmedia | Shutterstock.com)

Don't look down! Checking your phone may take just a few seconds, but that's enough to ruin your train of thought, according to new research showing that a three-second distraction can double the number of mistakes people make.

Given how commonly such distractions occur in modern life, the findings, published Jan. 7 in the Journal of Experimental Psychology, could have broad implications for how people work.

Past studies have shown that switching between many different tasks makes people worse at all of them. But those studies typically looked at longer distractions, said study co-author Erik Altmann, a psychologist at Michigan State University.

"We wanted to examine the kind of situation where someone is deep in thought and the phone rings," Altmann said. "After the phone call, you have to sit there and try to figure out where you left off in the task."

To test these situations, Altmann asked 300 undergraduates to complete a computerized task that involved a series of steps.

Students were shown a group of characters in different colors and formatting, and then asked to do several steps in order, such as picking out all the vowels, then all the red-colored letters, then all the even numbers, and so on.

Some of the time, the students could complete the task uninterrupted, but occasionally the computer screen would randomly display two letters and ask the students to type in those letters. Once the participants had done so, they went back to their tasks.

"It was meant to capture something like what you're doing when you're doing your taxes, because it's important to do the steps in the right sequence."

Though the distractions took only three seconds and weren't difficult tasks, students lost their places or made mistakes twice as often after those distractions as they did without interruptions.

The distractions were so brief that they couldn't have caused people to actually forget the tasks they were doing, losing them from short-term memory. Rather, Altmann hypothesizes that the demands of switching attention, no matter how briefly, take mental energy that would otherwise have gone toward the task.

That has implications for productivity in the workplace, where short distractions such as email alerts and phone calls are ubiquitous, he said. These brief distractions may also affect how "present" people are in social situations, he said.

"When people are stealing glances at their cellphones, they're not quite with you in the same way as when they're looking you in the eye," he said.