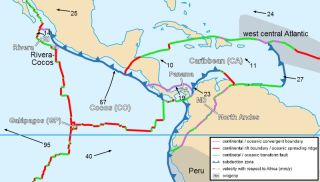 Colombia sits at the complex junction of three small tectonic plates: the Caribbean plate to the north, the Panama plate to the west and the Nazca plate to the southwest. All of them border the northwestern corner of the giant South America plate.

Both the Caribbean plate and the Nazca plates meet South America as subduction zones, sliding down beneath the continent. But the Panama plate, which carries a big, thick stack of old volcanoes, is hitting Colombia like a side-impact collision, according to a study published in the June 2013 issue of the journal Bulletin of the Seismological Society of America.

"[The Panama block] acts as an indenter, causing internal deformation of central and northern Colombia," study co-author Paul Mann, a geologist at the University of Houston, said in an email interview.

The balky pile of volcanoes refuses to slide easily down into the subduction zone between the Panama plate and the South America plate, the researchers said. "The thicker crust of the Panama block is less bendable," Mann said.

Because the thick crust is stuck, the Panama plate is tearing apart. This break in the oceanic crust, which the researchers call the "Caldas tear," can be seen in seismic waves, which change speed as they travel through warmer or colder material below the surface.

The tear is about 150 miles (240 kilometers) long and oriented east to west, along the border between the Panama and Nazca plates. The researchers think this creates the unusual earthquake pattern called the Bucamaranga nest, a dense area of seismic activity at about 86 miles (140 km) depth.

The tectonic shoving match has created a symmetrical V-shaped pattern of faults on the land in Colombia, centered on the impact. The Caldas tear is also reflected in Colombia's landscape, the researchers said. Small volcanoes aligned with the tear have an unusual chemical composition that could be related to the break, they said.