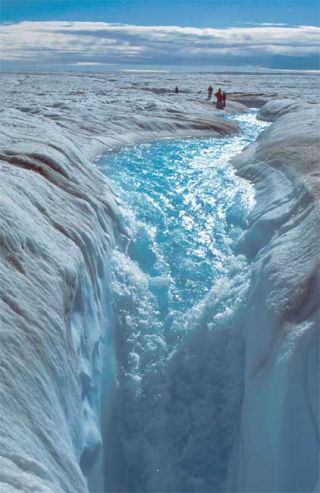 Special instruments installed in Greenland and Antarctica to measure melting ice may help scientists more accurately predict the rate of rising sea levels in the future.

Earlier this year, David Holland, a professor of mathematics at the Center for Atmosphere Ocean Science at New York University, spent two months installing devices on the Greenland Ice Sheet and the West Antarctic Ice Sheet.

These instruments, which are all roughly the size of a large suitcase and weigh about 100 pounds (45 kilograms), will study the atmosphere by collecting information on wind, air temperature and humidity. Other water-based devices will gather data on ocean temperatures, enabling the researchers to track the movement of warm ocean currents that melt portions of the ice sheets.

"Right now, there seems to be more melting going on than before," Holland told LiveScience. "By measuring the melting glaciers, we can see how much water is going into the ocean and raising sea levels." [Photos of Melt: Glaciers Before and After]

When ice melts, the water flows down slopes and eventually empties into the ocean, causing sea levels to rise. But, understanding why these changes are happening — and how much sea levels are rising — remains challenging, Holland said.

This is partly because researchers do not have enough data on melting ice in Greenland and Antarctica. Currently, most of the changes in the ice sheets have been observed by satellites in space.

"We can see that the ice is getting lower, and the oceans are rising higher," Holland said. "But, there is only so much we can see from space. We cannot see into the ocean, or below the ice surface, so that's why we go to these locations and put instruments into the ocean."

With more precise measurements, scientists may be able to determine the extent that human activities are contributing to the dwindling ice sheets, he added.

"Right now, we don't have enough data to really distinguish if what's going on is completely natural, or related to human activity in a changing climate," Holland said. "We need sustained measurements for several years in order to separate natural changes from possible anthropogenic changes."

As more and more information is collected, researchers will be able to feed data into complex mathematical formulas to develop computer models of rising global sea levels, Holland explained. He intends to use these instruments indefinitely to track long-term changes in the polar ice sheets.

"You can't build a model until you have observations of what you're trying to build," Holland said. "Polar regions, particularly Antarctica, are very difficult to access, which is why we hope this will really benefit our researchers and, really, the entire international community."