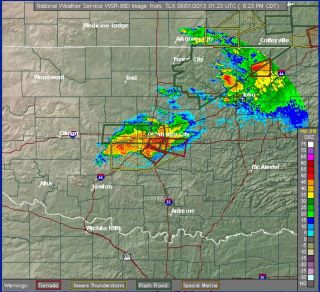 A tornado emergency was issued tonight in Oklahoma after at least two tornadoes touched down in the Oklahoma City metropolitan area, according to National Weather Service (NWS) tweets.

Another tornado was reported east of the Will Rogers Airport, according to a tweet by the National Weather Service, Norman.

Moore, Okla., still recovering from the EF5 tornado that ravaged the city on May 20, was included in the tornado warning, a declaration that means "a large, destructive tornado is moving into a densely populated area where widespread damage and fatalities could occur," CNN reports.