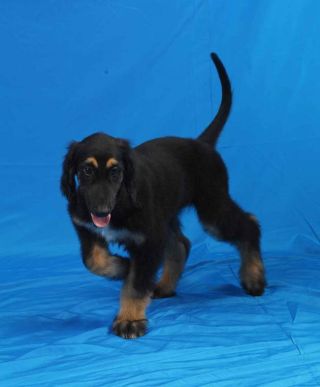 Puppy lovers in the United Kingdom may soon get a chance to extend their dog years, thanks to an odd new contest: A South Korean company wants to clone the most beloved U.K. pooch — again raising ethical questions about the practice of pet cloning.

Headed by a former stem-cell researcher named Woo-Suk Hwang, the Sooam Biotech Research Foundation has been cloning dogs and other animals for years, mostly for U.S. customers. Now, in an effort to expand into the British market, the lab has asked U.K. canine owners to submit a 500-word essay, along with photos and videos, demonstrating why their best friend's genes should live on, Sooam researcher Hanna Heejin Song wrote in an email to LiveScience.

The chosen dog owner gets 70 percent off the usual $100,000 price tag for replicating Rufus. [10 Things You Didn't Know About Dogs]

The process then follows the now-established outline for animal cloning: Sooam researchers will perform a biopsy to extract a viable skin cell from the dog, inject DNA from that cell into another dog's egg cell (one that has been emptied of DNA) and implant the resulting embryo into the womb of a surrogate canine mother.

When successful, the process births a cloned puppy about two months after implantation, Sooam's website says. That "successful" part usually takes several attempts, though — and several dogs are needed as egg donors and surrogate mothers. In the early days of dog cloning, it took at least dozens of egg donors, said John Woestendiek, author of "Dog, Inc." (Penguin Group, 2010), which investigates the world of dog cloning. "It's down to a handful now."

As if photocopying Fido weren't strange enough, the contest comes from the lab of Hwang, who earned first fame, and then infamy, for falsifying research data, claiming to have cloned human embryonic stem cells in 2004. Hwang was convicted in 2009 on several counts related to the bogus research.

Nevertheless, Hwang's company has successfully reunited several pet owners with genetic copies of their furry companions. Hwang led one of the first successful attempts at dog cloning when he replicated a pooch named Snuppy in 2005. Sooam researchers have also cloned wolves and coyotes. And last year, the company announced plans to try to “bring back” a woolly mammoth from extinction. The feat would require extracting DNA from frozen mammoths and incubating an embryo in an elephant surrogate mother. [6 Extinct Animals That Could Be Brought Back to Life]

Successes aside, Hwang's cloning endeavors still raise ethical concerns, Woestendiek said. First, the massive expenditure of money and scientific resources involved in cloning may look irresponsible when there are so many dogs languishing in shelters.

"Why go to all that expense if there are dogs that need homes?" Woestendiek asked. In the United States alone, 6 million to 8 million cats and dogs enter shelters each year, according to the Humane Society of the United States.

And, in most cases, it's pretty easy to find a new dog that looks like the old one, Woestendiek said. Cloning, after all, can only really replicate looks. The new dog is not, by any means, the "same" pet, and may behave differently, the author said.

"I think that personality is really what most people are looking to clone," Woestendiek noted. "And I don't think personality is clone-able." That's because though the clone should have a complete DNA match with the late dog, personality is the result of genes, upbringing and environment.

Dog cloning also raises concerns about the treatment of egg donors and surrogate mothers. U.S.-based company BioArts International left the pet-cloning business, in part, because of ethical questions about how its South Korean partners treated surrogate animals, according to a company statement. South Korea lacks the oversight that protects research animals in the United States, Woestendiek said. And, though it reportedly doesn't happen much anymore, some of the surrogate dogs used in Korea have gone to "farms" — meaning they were then raised for their meat, Woestendiek added.

The dog owners who have gotten their pets cloned, however, seem "totally pleased" with the results, Woestendiek said. The whole spectacle just shows how much dog lovers care about their canine companions. "Dogs are more like children than pets now," he said.

The U.K. contest echoes some of the first forays into commercial pet cloning in the Americas, Woestendiek said. In 2009, Nova Scotia resident John Symington won the right to clone his German shepherd Trakr in the "Golden Clone Giveaway," hosted by BioArts, which contracted the actual work to Hwang's lab. Symington claimed Trakr, a rescue dog, had found the last survivor of the attack in New York.

Applicants to the new contest must be U.K. residents, and they have until July 1 to make submissions to dogcloning@gmail.com. Sooam will post applicants' videos on the contest's YouTube channel: DogCloning UK.