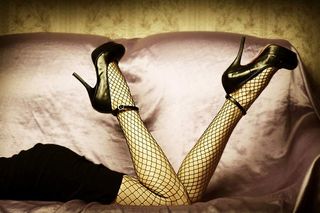 Sexual attraction to objects such as shoes may be considered a fetish disorder in the new edition of the mental health manual, that is, if it meets certain criteria, such as causing the person significant distress or leading to the harm of others.
(Image: © katalinks | Shutterstock)

Editor's Note: With the release of the latest edition of the mental-health manual, the Diagnostic and Statistical Manual of Mental Disorders (the DSM), LiveScience takes a close look at some of the disorders it defines. This series asks the fundamental question: What is normal, and what is not?

Many people would consider a sexual attraction to objects, such as shoes or underwear, abnormal or unnatural. But is it a mental illness? The new edition of the mental-health manual, the DSM-5, offers a conditional answer: It can be, but isn't necessarily.

Fetishism is among a number of unusual attractions, known as paraphilias, that can stray into disorder territory. Unlike the previous version of the manual, the DSM-5 emphasizes the distinction between merely kinky and mentally ill. [Hot Stuff? 10 Unusual Sexual Fixations]

Someone can cross this threshold in a number of ways — for instance, when the attraction causes him significant distress, impairs his ability to function or could lead him to harm others.

The label “disorder” is akin to labeling a set of symptoms as a mental illness, which by definition, interferes with normal functioning.

For example, if the fetishist becomes so aroused by his colleagues' footwear that he cannot hold down a job, or if it causes him to steal shoes, he may have a fetishistic disorder, said Robin Rosenberg, a clinical psychologist and co-author of the psychology textbook "Abnormal Psychology" (Worth Publishers, 2009).

A similar line of thought — that a sexual interest or behavior considered abnormal is not, in and of itself, a problem — influenced the removal of homosexuality from the DSM 40 years ago.

The threshold between kinkiness and mental disorder isn’t always straightforward.  Sometimes, someone with a fetish may feel uncomfortable because he believes his attraction to objects is abnormal; however, this response to social norms does not mean he necessarily has a disorder, Rosenberg said.