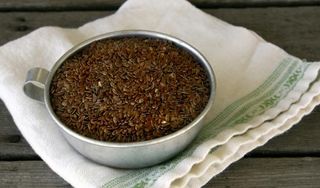 Most people know that omega-3 fatty acids are an important part of a healthy diet, but that's about the extent of most diners' knowledge. Is that enough? Maybe not. This fat has been the subject of many studies for years, and researchers are still learning about its potential health benefits.

There is no recommended daily allowance for fatty acids, but the report mentioned above does offer some helpful information. For example, the researchers reported a 70 percent reduction in mortality from cardiovascular disease in people who consumed one omega-3 fatty acid for every four omega-6 fatty acids. The researchers also found that women who consumed a balanced ratio of omega-3s to omega-6s, or close to that, were less likely to develop breast cancer.

And this certainly wasn't the last study to link omega-3 fatty acids to breast cancer prevention. A February study in the Journal of Nutritional Biochemistry found that a lifelong diet rich in omega-3 fatty acids may reduce the risk of breast cancer tumors by two-thirds. The American Journal of Clinical Nutrition also published a study suggesting that supplementing the diet with these fatty acids may help prevent skin cancer.

So, with that background about the research, here's how you can get more omega-3s in your diet:

Don't hold the anchovy. This little fish is an omega-3 powerhouse. Bluefin tuna, trout and salmon are also great sources.

Try flaxseed or flaxseed oil. Flaxseed contains an omega-3 fatty acid called alpha linolenic acid (ALA), a precursor to the fatty acids (EPA and DHA) found in anchovies, salmon and other cold-water fish. Because the body has to work to convert ALA to DHA, you may not want to rely on flaxseed as your only source. Still, flaxseed also contains fiber, B vitamins and magnesium, so it's worth getting to know.

Don't count out these veggies! Although vegetables aren't known for their omega-3 content, two are worth noting. Cauliflower contains heart-friendly nutrients like potassium and magnesium, along with its fatty acids. Brussels sprouts aren't everyone's favorite food, but no one can argue that they are nutritionally sound. Just one serving contains about 430 milligrams of ALA.

Pass it on: Omega-3 fatty acids may lower the risk of breast and skin cancer.