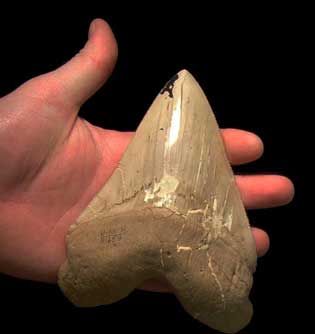 Teeth such as this from the extinct 40-foot-long shark Carcharocles megalodon are common in the Sharktooth Hill Bone Bed because, like modern sharks, these extinct sharks also shed teeth throughout their lives.
(Image: © UC Berkeley)

The famed Sharktooth Hill Bone Bed in California is loaded with shark teeth as big as a hand and each weighing a pound, from giant prehistoric killers called megalodon.

Intermixed with copious bones from extinct seals, whales and fish, as well as turtle shells three times the size of today's leatherbacks, all these relics seem to tell of a 15-million-year-old disaster.

But scientists now suggest this vast graveyard might not have resulted from a sudden catastrophe. Instead, they suggest it formed slowly over a long span of time, potentially serving as a window into thousands of years of ancient history.

The Sharktooth Hill Bone Bed is the richest and most extensive marine deposit of bones in the world, averaging roughly 200 bones per square yard. All in all, the bed is a six-to-20-inch-thick layer of fossil bones, 10 miles of it exposed, which covers nearly 50 square miles just outside and northeast of Bakersfield.

Since the bed's discovery in the 1850s, paleontologists have argued over how the bones got there.

Perhaps a widespread catastrophe such as a volcanic eruption or red tide led to a massive die-off. Or maybe it was a killing ground for the extinct 40-foot-long shark Carcharocles megalodon, or a long-term breeding area for seals and other marine animals.

To pinpoint its origins, the researchers cut out a square yard section of the bone bed for study, complete with rock layers above and below. They also examined some 3,000 fossil bone and teeth specimens previously collected and stored in museums.

The absence of volcanic ash makes a volcanic catastrophe unlikely as the origin of the bones, while the puzzling presence of land mammal fossils, such as tapirs and horses that must have washed out to sea and into the bed, makes it improbable that some toxic sea phenomenon such as red tide was the cause. And given that only five of the some 3,000 bones examined were marked by shark bites, it seems unlikely that giant predatory sharks were the major cause of the bone bed. Finally, the few young or juvenile specimens the researchers found discounted the possibility that the bed was a breeding ground for early seals.

When the bone bed formed between 15.2 and 15.9 million years ago, the climate was warming, sea level was at a peak, the vast Central Valley of California was an inland sea now dubbed the Temblor Sea and the emerging Sierra Nevada mountain range was shoreline. Close analysis of the geology of the Sharktooth Hill area suggests it was part of an underwater shelf in a large embayment, directly opposite a wide opening to the sea.

The fossils in the bone bed itself seemed mostly scattered, as if the animal carcasses had decayed and their bones had been dispersed by currents.

"The bones look a bit rotten," said researcher Jere Lipps at the University of California, Berkeley, "as if they lay on the seafloor for a long time and were abraded by water with sand in it."

Many bones had manganese nodules and growths, which form on bones that sit for long periods in seawater before being covered by sediment.

The scientists conclude that currents swept sediment away from the bone beds for 100,000 to 700,000 years, during which time bones remained exposed on the ocean floor, accumulating in a big and shifting pile.

"These animals were dying over the whole area, but no sediment deposition was going on, possibly related to rising sea levels that snuffed out silt and sand deposition or restricted it to the very near-shore environment," said researcher Nicholas Pyenson at the University of British Columbia.

Not just a snapshot

In the layer above the bone bed, most skeletons were found with the bones encased in sediment and articulated together as they were in life.

"Once sea level started going down, then more sediment began to erode from near shore," Pyenson explained, with the sediment preserving the skeletons together.

"So we now know that this bone bed accumulated over a long period of time, and not just a snapshot of history, so it could give you a more complete view of life in the area," Lipps told LiveScience. "I suppose that does make interpreting it a bit more complicated, but scientists are interested in figuring out puzzles."

The researchers hope their study will draw renewed attention to the bone bed, which they note still needs protection.

"This deposit is an outstanding national heritage," Lipps said. "It could be a wonderful tourist site and great scientific resource, the equivalent of Dinosaur National Park," he added, referring to a popular park in Colorado and Utah.

The findings are detailed in the June issue of the journal Geology.