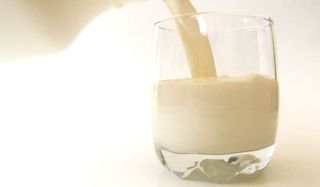 Soy milk may be worse for your teeth than cow's milk, a new study suggests.

The results show bacteria commonly found in the mouth produce five to six times more acid when they feed on soy milk compared to cow's milk.

The findings suggest soy beverages have a higher potential to cause cavities, compared with cow's milk, the researchers say.

However, the study was conducted in laboratory dishes, and so more work is needed before researchers know whether soy milk actually damages teeth, said William Bowen, professor emeritus of microbiology and immunology at the University of Rochester's Center for Oral Biology, who was not involved in the study.

The cavity risk of most substances depends on how you use them, Bowen said. For instance, drinking one glass of soy milk is unlikely to harm teeth, but allowing a baby to sip from a bottle containing soy milk all day might be cause for concern, Bowen said. In contrast, cow's milk is known not to promote cavities, regardless of how much is consumed, Bowen said.

"It's suspicious, but more work is certainly needed to support the contention," Bowen said of the study's main conclusion.

Eric Reynolds, of the University of Melbourne's Dental School in Australia, and colleagues chose four Australian-brand soy beverages, and two brands of cow's milk for their experiments. The milks were each mixed with bacteria called Streptococcus mutans, which are found in the human mouth and commonly associated with cavities.

They found that the soy beverages, after the addition of the bacteria, became more acidic  within 10 minutes.

In contrast, the acidity of the cow's milk was not changed significantly after the bacteria were added.

The researchers did not include saliva in their experiments, which could produce an effect to counteract the high acid production of soy milk, Bowen noted.

The study was published online May 17 in the Journal of Dentistry.

Pass it on: Soy milk may have a higher potential to cause cavities compared to cow's milk.