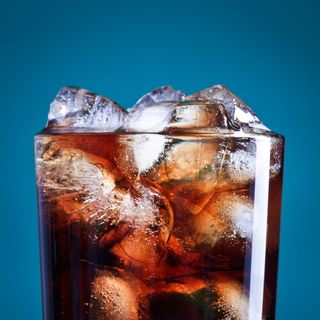 Drinking regular soda may increase your risk of stroke, a new study suggests.

In the study, men and women who consumed one or more sugar-sweetened sodas per day were 16 percent more likely to have a stroke over a 20- to 30-year period, compared with those who drank no soda.

The results held even after the researchers took into account factors that could affect stroke risk, such as participants' body mass indexes (BMIs) and total calorie intake.

The study also found that substituting certain beverages for soda, such as coffee, could reduce stroke risk.

"Soda remains the largest source of added sugar in the diet," said study researcher Dr. Adam Bernstein, of the Cleveland Clinic's Wellness Institute. "What we're beginning to understand is that regular intake of these beverages sets off a chain reaction in the body that can potentially lead to many diseases — including stroke."

In sugar sweetened sodas, the high sugar content may lead to rapid increases in blood sugar (glucose), and an increase in the hormone insulin, which helps get sugar into cells. Over time, the body may develop resistance to insulin, leading to other physiologic changes that increase the risk of stroke, Bernstein said.

Fructose, a sugar present in some sodas, can increase blood levels of the compound uric acid, which in turn, can increase blood pressure, the researchers said. The development of diabetes and hypertension may be one way soda consumption increases stroke risk.

"These findings reiterate the importance of encouraging individuals to substitute alternate beverages for soda," Bernstein said.

The study also found an association between drinking low-calorie soda and increased stroke risk, but the researchers said this finding should be interpreted with caution, because at this time there is not a biological explanation for the link. Moreover, an earlier study conducted by the researchers found no link between low-calorie soda consumption and increased stroke risk.

The study was published online April 4 in the American Journal of Clinical Nutrition.

Pass it on: Daily consumption of regular soda may increase the risk of stroke.