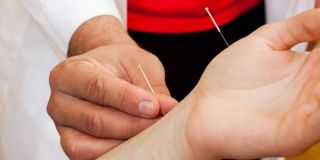 People who received acupuncture as a treatment for migraine pain felt better than those who didn't use acupuncture, but the effect was small, according to a new study from China.

Researchers looked at whether acupuncture was more effective in preventing migraines compared with "sham" acupuncture — in which people may think they're getting acupuncture, but the needles never pierce their skin.

After receiving 20 treatments in one month, all study participants reported having migraines on fewer days, and there was a small difference in improvement between those who received real and sham acupuncture.

"Improvement lasted two months after treatment stopped, so this should make patients and clinicians think about acupuncture in migraine patients, if more proven treatments are not helping," said Dr. Jessica Heiring, a neurologist at the Minneapolis Clinic of Neurology, who was not involved with the study.

The study was published today (Jan. 9) in the Canadian Medical Association Journal.

Acupuncture may or may not relieve migraine pain

About 12 percent of the U.S. population experiences migraines, according to the National Institute of Neurological Disorders and Stroke.

A migraine is a throbbing headache that can last from four to 72 hours, often accompanied by pulsating pain, nausea, vomiting and sensitivity to light and sound.

Migraines occur in both children and adults, but affect women three times more often than men.

Although pain relievers, such as aspirin and ibuprofen, and prescription drugs are commonly used to treat migraines, more and more people are turning to acupuncture for help with pain.

Acupuncture is an ancient traditional Chinese medicine that involves inserting needles into specific points in the body. Experts in the practice believe that by stimulating these points with needles, they may trigger the body's own healing mechanisms.

"These results are similar to what has been seen in the past," Heiring said.

"The limitation of this study, like acupuncture studies before it, is the placebo rate is high," she said.

In other words, it's unclear if sham acupuncture could have had an effect.

"The fact they had to do sham acupuncture means they were actively doing something to the patient, so it's unclear if this had a treatment effect or if it was from something else," she said.

Electro-stimulation may play a role

The study included 480 people with a history of experiencing migraines.

They were assigned to four groups, three of which received a version of traditional Chinese acupuncture, and one which received sham acupuncture. All treatments included electro-stimulation, in which needles that are attached to a device that generates continuous electric pulses.

Participants recorded the number of days they had migraines during four periods of the study, before treatment, during treatment and two to four months after treatment.

Researchers found no difference in the number of days with a migraine between any of the three acupuncture groups compared with the sham group. They did, however, find a small effect four months after treatment.

Overall, study authors concluded that the type of acupuncture used had little to do with treatment. But they did suggest that the use of electro-stimulation could have had an affect on treatment.

"I think it's interesting that patients in all groups continued to note less migraine days or weeks after treatment, which suggests that acupuncture is doing something to alter pain processing," Heiring said.

"But you can't say it's due to acupuncture treatment," she said.