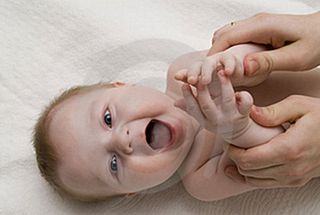 Many parents fret about ensuring their childrens' happiness, but those worries could be too late if happiness is mainly inherited, as a researcher now suggests.

Epigenetics research has shown how life experiences and a person's environment can impact gene expression and change the traits that parents pass on to their kids. That provides some indirect support for this latest hypothesis.

"It is well known, of course, that parental behavior affects children, and that the genes that a child gets from its parents help shape that child's character." said Dr. Alberto Halabe Bucay of Research Center Halabe and Darwich in Mexico. "My paper suggests a way that the parent's psychology before conception can actually affect the child's genes."

Halabe Bucay points to brain chemicals that accompany different moods, and suggests that they could affect eggs and sperm. Such chemicals may alter the way that specific genes are expressed in the cells that ultimately fuse to form the next generation — and in turn influence how a child develops.

The new paper is detailed in the May issue of the journal Bioscience Hypotheses, which showcases scientifically intriguing ideas and hypotheses rather than peer-reviewed studies. That means this new idea has not been tested nor reviewed thoroughly by other experts in the field.

"Although happiness is subject to a wide range of external influences, we have found that there is a heritable component of happiness which can be entirely explained by genetic architecture of personality," said Alexander Weiss, a psychologist at the University of Edinburgh who lead the previous study.

Of course, parents can't gift happiness to their kids wholesale. The keys to happiness are manifold, and life experiences seem to play an important role, other studies have shown. Kids will still struggle through their usual challenges of adolescence and eventually adulthood, and try to seek happiness any way they can — whether by finding a great place to live or being charitable.

But if future evidence emerges in support of the idea of inherited happiness, whatever joy that young people gather may somehow find its way, at least in part, to the next generation.