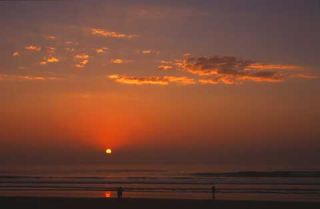 A San Diego sunset is not a cure for depression, but it can't hurt. Image
(Image: © Dreamstime)

I am boarding a plane headed to San Diego, Calif., from my home town of Ithaca, New York, and pondering the recent announcement that where one lives is connected to the incidence of Frequent Mental Distress (FMD).

As I take off my down coat (yes, it's April, but we just had snow), discard my galoshes, and roll up the sleeves of my flannel shirt, I am thinking hard about the researchers from San Diego who presumably averted their gaze from the pounding surf before their office windows long enough to analyze surveys on mental health from the Centers for Disease Control to discover that people who live on, say, Hawaiian beaches have fewer bouts of stress, depression and emotional problems than people who live in the misty hollows of Appalachia.

I live in a town where, as I was told when I moved there, "the clouds go to die." Local legend claims Ithaca has more cloudy days than Seattle, and we certainly get more snow and ice than the Pacific Northwest. Relief from the snow and gray skies comes during the summer, when we are felled by heat and humidity. In fact, the weather stinks most of the time, and so I know full well how where you live affects how you feel. We have a huge county mental health building, and everyone in town is pale and irritable.

The researchers found that the adult prevalence of FMD was 9.4 percent overall. It ranged from 6.6 percent in Hawaii to 14.4 percent in Kentucky. The results will be published in the June issue of the American Journal of Preventive Medicine.

The question is, then, why in the world would anyone live anywhere but San Diego or Hawaii?

Humans do, in fact, have a long history of choosing to live in nice places. World demographics show that populations are highest near water; we tend to put down roots along rivers, around lakes and close to oceans. And no wonder. The view is great from the shore, as those of us from Ithaca know when we rent our summer beach condos.

But there might be more at stake here than the view.

Nutritionist Michael Crawford of the Metropolitan University in London claims that ancestral humans were so connected to beach and lake life that they got most of their food from the water. More interesting, Crawford claims that all that fish eating was the engine behind human brain growth over evolutionary time. Fish contain high levels of omega-3 fatty acids which encourage brain expansion and lift mood. It's well established that those who eat lots of ocean going fish suffer less from depression, and that people with low mood can be uplifted by taking fish oil capsules.

And so our ancestors not only chose to live in nice places, they derived real evolutionary benefits from doing so.

The idiots are the ones who picked up stakes and moved inland. But that was inevitable. There is only so much shoreline to go around, and someone had to walk into the interior and investigate another ecology.

In fact, humans tend to be really good at adapting to different environments, and that is both our advantage and our curse. It allows us to move up mountains, out on deserts, and into the snowy and humid Northeast, and survive and procreate even though we are really grumpy about it.

But tonight in San Diego, sitting in a bubbling hot tub with a class of crisp California Chardonnay in my hand, I'll wonder, certainly not for the first time, if that ability to adapt to less than pleasant environments was really such a great leap forward for humankind.