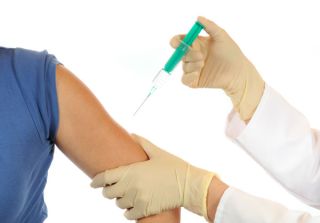 Young children who receive vaccinations against whooping cough are not fully protected against the disease three to six years after their shots, a new study suggests.

Currently, kids receive five doses of the pertussis vaccine , with the final injection given between ages four and six. A pertussis booster shot is recommended for adolescents.

Researchers knew that pertussis vaccine protection waned with time. But studies had not looked cases of pertussis in vaccinated children this young before, said study researcher Sara Tartof, a medical epidemiologist at the Centers of Disease Control and Prevention.

The new findings underscore the importance of the booster shot for adolescents.

"It's really important for kids to get that booster at 11 or 12 years of age," Tartof said.

The new findings are not enough to warrant a change in children's vaccination schedules , Tartof said. However, future studies should examine factors that may affect how much protection the vaccine gives, including the age at which it is given, Tartof said.

The first version of the whooping cough vaccine, known as the whole cell pertussis vaccine, had long lasting immunity. Its protection was thought to last much of life, said Dr. William Schaffner, chairman of the department of preventive medicine at Vanderbilt University. However, this vaccination often caused reactions at the injection site, such as redness and swelling.

Because of concerns about safety, a new, more purified version of the vaccine was created. Childhood vaccination with the acellular pertussis vaccines began in 1997, Schaffner said. Researchers are still studying how long immunity lasts with this vaccine.

The vaccines for diphtheria, tetanus and pertussis are given to children together in a single injection, nicknamed DTaP. Tartof and colleagues examined the immunization records of more than 220,000 children born in Minnesota between 1998 and 2003.

Information from the state's pertussis surveillance system was used to determine which kids came down with pertussis. Children were included in the study only if they received all five doses of the pertussis vaccine. They were followed for up to six years after their final shot.

A child's risk of pertussis increased each year after their final shot.

By six years after vaccination, the risk had increased to 7 times what it was in the first year.

Tartof noted that if vaccinated children develop pertussis, their condition is less severe if they have received all five shots.

The finding "highlights the fact that pertussis immunity can be short lived," said Dr. Paul Offit, chief of the director of the Vaccine Education Center at the Children's Hospital of Philadelphia, who was not involved in the study.

And the results suggest that it is not unreasonable to consider more frequent booster vaccinations among teens and adults, Offit said.

Technically a person's last pertussis vaccination may be when they receive their booster at age 11 or 12 years old, Offit said. However, it's important that people in older age groups have immunity against pertussis because of the risk they may transmit the disease to infants.

Babies less than 6 months old are at greater risk of dying from pertussis, and they cannot begin to be vaccinated until they are two months old. Doctors want to "cocoon" infants by vaccinating all the adults and teens around them, Offit said.

The outbreaks of pertussis that have occurred in recent years are likely due to people deciding to forego vaccination, Offit said.

"When you make a choice not to vaccinate, then you are in trouble," Offit said. "Because the disease is always going to be around."

The study results argue for the enforcement of pertussis boosters in middle school children, Schaffner said. Without booster shots, there may be outbreaks of pertussis among this young population, he said.

Pass it on: A child's risk of whooping cough increases progressively each year following their final vaccination with the pertussis vaccine.