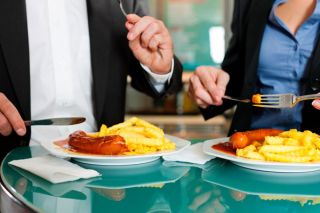 A lot of sharing goes on in a relationship, including sharing of unhealthy habits, a new study finds.

The results suggest people in both married, straight relationships and cohabiting gay and lesbian relationships pick up their partner's tendency to eat unhealthy foods or skip the gym .

The new study suggests the effect of marriage and cohabitation on health isn't always so rosy.

The researchers report at least two ways this happens: one partner has bad habits and influences the other, or both may "sync up" their bad habits. In heterosexual partnerships in the study, men were nearly always viewed as the "bad influence", the researchers said.

"The finding that one partner is a 'direct bad influence' suggests that individuals converge in health habits across the course of their relationship, because one individual's unhealthy habits directly promotes the other's unhealthy habits," said study researcher Corinne Reczek, an assistant professor of sociology at the University of Cincinnati. An example would be both partners eating unhealthy foods that one partner purchased.

"For these individuals, one partner may not engage in what they consider an unhealthy habit on their own, but when their desire for such a habit is matched by their partners, they partake in unhealthy habits," Reczek wrote.

The study is among the first of its kind to examine how gay and lesbian couples promote each other's unhealthy habits, the researchers said.

Participants were individually asked a series of open-ended questions about smoking, drinking, food consumption, sleep patterns, exercise habits and other health habits. "Particular attention was paid to how partners shaped each of these habits," Reczek wrote.

The study will be presented Aug. 23 at the American Sociological Association meeting in Las Vegas.

Pass it on: People in committed relationships may share unhealthy habits.