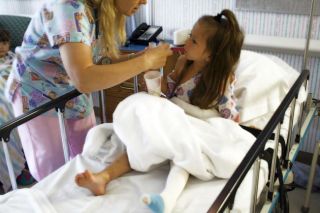 A young girl prepares to undergo surgery in a hospital.
(Image: © Jyn Meyer/SXC)

Witnessing another person's physical pain registers more quickly in the brain than compassion for social or psychological pain, but the latter leaves a much longer-lasting impression.

New brain-imaging research showed an almost immediate "wince" reaction to seeing someone's physical pain. By contrast the brain took 6 to 8 seconds to respond to stories about social or psychological pain — a very long time considering that neurons fire within milliseconds.

Compassion for another person's social or psychological pain also activated some of the same brain areas triggered by compassion for physical pain, and particularly the region responsible for gut feelings, known as the anterior insula.

"That area has been implicated before in all sorts of studies about emotion, empathy and disgust," said Mary Helen Immordino-Yang, a cognitive neuroscientist at the University of Southern California.

This research also reflects one of the first brain-imaging studies to focus on positive social emotions such as admiration, rather than fear or pain.

"We specifically set out to look at admiration because it's a social emotion that's important for the establishment of moral systems, and it shows people what social behaviors are valued in society," Immordino-Yang told LiveScience.

Immordino-Yang and her colleagues used short stories based on real-life people to stir social emotions, such compassion for physical or social pain, or as admiration for virtue or skill.

The researchers then watched for differences in the brain's response depending on whether the stories involved social or physical situations. For instance, one story told the tale of a 9-year-old girl with a dying mother, while another told of the physical pain involving a soccer player whose leg broke mid-calf.

"It's almost as if we have a body in which to play out feelings about other people's situations, but that body is subdivided between the musculoskeletal system and the gut," Immordino-Yang noted.

Admiration for virtue showed about as strong a brain response as compassion for social or psychological pain, and the same lingering effect. But admiration for physical skill seemed to register lowest in the study.

Immordino-Yang plans to continue her line of research and better understand how social development happens — an interest that dates back to her years spent teaching in a junior public high school outside Boston and around the world.

The full research is detailed in the April 13 issue of the journal Proceedings of the National Academy of Sciences.