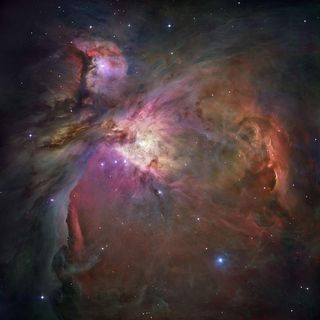 This new Hubble image of the Orion Nebula shows dense pillars of gas and dust that may be the homes of fledgling stars, and hot, young, massive stars that have emerged from their cocoons and are shaping the nebula with powerful ultraviolet light.
(Image: © NASA, ESA, M. Robberto (Space Telescope Science Institute/ESA) and the Hubble Space Telescope Orion Treasury Project Team)

Some morals are simple. Dark morals, not so.

The morals we all tend to agree on are the easier ones to identify, things like not harming people or caring for the needy, the thinking goes [though already this column seems to be on shaky ground]. In space, these morals are akin to stars, planets and other visible matter — the obvious stuff — according to a theory by University of Virginia psychologist Jonathan Haidt.

The darker morals (think exotic concepts like dark matter and dark energy which are everywhere but nowhere) get into more slippery things like group loyalty, respect for authority, purity and sanctity, reports MSNBC's Alan Boyle, who was in Phoenix over the weekend attending the Origins conference where this was discussed. These are the more obscure morals that account for things like patriotism, conformism and taboos about sex and food.

Dark morals are the ones that different people have their own views on. And, twisting a perfectly good George Thorogood line, evubody's different.

Okay. Let's stop right there and go over some basics. First, we are all moral hypocrites. Studies show this. We judge others more harshly than we judge ourselves. Second, morality leads to unethical acts. Again, science. Okay, back to Haidt's ideas ...

According to Haidt, Boyle reports, conservatives tend to focus on sex, while "liberals are getting increasingly concerned with food." [I see a poll in the making.]

Haidt's ideas have been floating around a while, and they get a lot deeper. In 2007, he published his thoughts in the journal Science. Here's some of the questions he asks as a way to — let's use a cosmologist's jargon — probe dark morality:

I can offer zero help on the above questions, but personally I'm leaning toward keeping my mouth shut, because they sound to me a lot the "when did you stop beating your wife?" question. Moving along, Haidt thinks we've evolved to a moral situation that involves three principles:

1. Intuitive primacy, which says that human emotions and gut feelings generally drive our moral judgments. [Translation: Stealing that loaf of bread was justified for Jean Valjean, but probably not for you.]

2. Moral thinking if for social doing, which says that we engage in moral reasoning not to figure out the truth, but to persuade other people of our virtue or to influence them to support us. [Translation: I can't believe you're a democan! Only Republocrats have it right!]

3. Morality binds and builds, meaning morality and gossip [Apparently we are evolutionarily designed to gossip] were crucial for the evolution of human ultrasociality, which allows humans — but no other primates — to live in large and highly cooperative groups. [Dear reader, please offer up your translation to this one in the Comments section below.--RRB]

"Putting these three principles together forces us to re-evaluate many of our most cherished notions about ourselves," Haidt explained in that 2007 article. "Since the time of the Enlightenment ... many philosophers have celebrated the power and virtue of cool, dispassionate reasoning. Unfortunately, few people other than philosophers can engage in such cool, honest reasoning when moral issues are at stake. The rest of us [I like that Haidt sees himself as one of us, or at least gives us that impression.] behave more like lawyers, using any arguments we can find to make our case, rather than like judges or scientists searching for the truth. This doesn't mean we are doomed to be immoral; it just means that we should look for the roots of our considerable virtue elsewhere — in the emotions and intuitions that make us so generally decent and cooperative, yet also sometimes willing to hurt or kill in defense of a principle, a person or a place."

The meaning of everything above

As I understand it, there is a practical upshot of Haidt's reasoning, and this jibes with something I've noticed a lot in people I love and some I care a little less about: Conservatives think liberals are idiots, and liberals think conservatives are idiots. Or perhaps it's the other way around, depending on your point of view.

"We all start off with the same evolved moral capacities," Haidt writes [in an apparent compliment to us all for rising above the chimps], "but then we each learn only a subset of the available human virtues and values. We often end up demonizing people with different political ideologies because of our inability to appreciate the moral motives operating on the other side of a conflict. We are surrounded by moral conflicts, on the personal level, the national level and the international level.