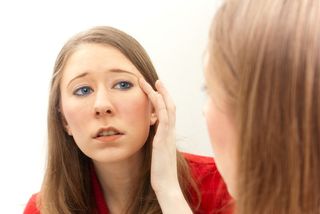 For a person who suffers from body dysmorphic disorder, the preoccupation with a feature she believes to be defective can take a heavy toll, demanding hours of fussing or agonizing.
(Image: © Jean Valley | Shutterstock)

A disfiguring bump on the nose that seems to scream for plastic surgery; eyebrows that appear to get thicker and thicker, requiring constant plucking; bodybuilding that never seems to build enough muscle to satisfy — the obsessions that come with body dysmorphic disorder (BDD) can take many forms.

To the rest of the world, that bump, the eyebrows, the not-buff-enough muscles or other perceived imperfections appear, at worst, unremarkable. But for a person who suffers from BDD, the preoccupation with a feature he or she believes to be grotesque or defective can take a heavy toll, demanding hours of fussing or agonizing.

"People with BDD spend so much time preoccupied with their perceived defect and trying to hide it, that their lives are really limited — it fills their days," said Robin Rosenberg, a clinical psychologist and co-author of the psychology textbook "Abnormal Psychology" (Worth Publishers, 2009). [The 10 Most Controversial Psychiatric Disorders]

Body dysmorphic disorder was included in the previous edition of the mental health manual Diagnostic and Statistical Manual of Mental Disorders (DSM-IV), and with the release of the new edition, DSM-5, it's still classified as a diagnosis, but with some changes. The new DSM-5, released on May 22, includes a new emphasis on the compulsions associated with BDD — for example, repeatedly combing one's hair to cover up an imagined scalp problem, or spending hours applying and reapplying makeup to cover a few pimples. Because of this change, simply being obsessed with a perceived defect is no longer enough for a diagnosis, Rosenberg said.

Although he was never publicly diagnosed, "King of Pop" Michael Jackson is considered a poster boy for BDD. The morphing structure of his face, including the cleft chin and the narrowed nose, presented evidence of extensive surgery. (His change in complexion is attributed to a skin pigment condition known as vitiligo.)

BDD falls toward the extreme end of a continuum of behavior that focuses on bodily appearance, Rosenberg said. It's not considered abnormal for some women to change outfits several times before going out, or for a man to spend time on a comb-over to hide a bald spot. Likewise, up to a point, the decision to get plastic surgery is not necessarily a pathological one, she said.

To suffer from BDD, someone must perceive some aspect of his or her body as significantly "defective" (even though the "defect" is minor, if it exists at all). In addition, that perception must cause significant distress and impair his or her ability to function.

For instance, if someone refuses to leave the house because of a zit, that could be a flag for a mental health professional to consider whether or not that person has BDD, she said.