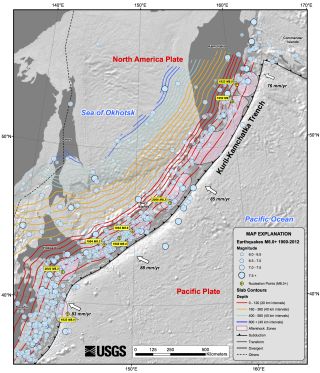 Recent earthquakes near the Sea of Okhotsk in Russia, including one of the deepest ever recorded.
(Image: © USGS)

The massive, magnitude-8.3 temblor that struck today (May 24) near Russia's Kamchatka Peninsula could turn out be the deepest earthquake ever recorded.

At 378 miles (609 kilometers) below the seafloor, the quake could best the previous record set in Bolivia, in 1994. The initial depth may be revised as scientists collect more data. The Bolivian quake was a magnitude-8.2, and 392 miles deep (631 km), Nature News reported.

Why so deep? The Sea of Okhotsk sits above a subduction zone, where the Pacific Plate dives beneath the North America Plate. (Though some scientists think there is also a microplate, a small tectonic plate, beneath the sea.) The northwest Pacific crust is some of oldest, coldest oceanic crust subducting on Earth. It's also quickly rolling into the subduction zone, like a speedy conveyor belt, so the cold crust reaches deep into Earth's mantle before warming up.

This setting makes for deep earthquakes in the subducted Pacific plate crust. The extraordinary depth of today's earthquake also means the shaking traveled far across Russia, reaching Moscow and rattling the Kremlin 4,000 miles (6,400 km) away. The waves also crossed the United States, as seen in this video from the Incorporated Research Institutions for Seismology.