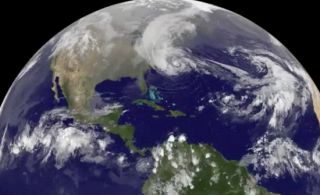 Get ready for a busy and possibly "extremely active" hurricane season, said forecasters who today (May 23) unveiled their predictions of the number and intensity of storms expected in the Atlantic Ocean basin during the 2013 hurricane season.

Scientists from the National Oceanic and Atmospheric Administration (NOAA) said they expect to see 13 to 20 named storms, a designation that includes tropical storms and hurricanes. This range means the season should be an "above normal and possibly an extremely active" one, said Kathryn Sullivan, NOAA's acting director.

Sullivan said that NOAA expects to see seven to 11 hurricanes (those storms with sustained winds of at least 74 mph, or 119 km/h). Of these, three to six are likely to be major hurricanes, Sullivan said, referring to those hurricanes of Category 3, 4 or 5, with winds of 111 mph (179 km/h) or higher. [Image Gallery: Hurricanes From Above]

This forecast is well above the seasonal average of 12 named storms, six hurricanes and three major hurricanes, according to NOAA.

A confluence of factors

The above-normal season is likely thanks to a "confluence of factors" that favor cyclone formation, Sullivan said. These include above-average sea-surface temperatures in the Atlantic and Caribbean where these storms form. Warm waters fuel cyclones and make them stronger. The El Niño climate pattern is not in effect, which favors Atlantic hurricanes, since El Niño's easterly winds can tear apart developing cyclones.

Since 1995, other atmospheric patterns over the Atlantic have also been in an active phase for hurricanes. These conditions are expected to last until at least 2020, Sullivan said.

Hurricane season officially begins on June 1 and ends on Nov. 30, though storms can, and have, formed outside of those dates when conditions were favorable.

While forecasters can make an educated guess as to how many storms are likely to form in a given season, the computer models used to inform predictions cannot say this early in the season where hurricanes or cyclones are likely to hit. "Anybody could be hit in the Atlantic and Gulf Coast," Sullivan said.

Due to in part to improvements in the Doppler radar used by NOAA's hurricane hunter aircraft, intensity forecasts are also likely to be 10 percent to 15 percent more accurate than in the past, said Gerry Bell, the lead hurricane season forecaster for NOAA's Climate Prediction Center.

Last year's season was expected to be average, but surpassed early predictions. It will be remembered primarily for Hurricane Sandy, which killed more than 100 people and cost nearly $50 billion in damage along the U.S. Northeast. But Sandy was only the last hurricane in a very active — and unusual — season.

One of the busiest on record, the 2012 season also saw weaker-than-average cyclones and began earlier than usual. There were 19 named tropical storms last year in the Atlantic Ocean basin, tying 2012 at third for most named-storms in recorded history. The top spot goes to the 2005 season, which saw 28 named storms.

Two storms, Alberto and Beryl, spun up this spring before the official hurricane season start date of June 1, an unusual occurrence. The named storms resulted from warmer-than-average sea-surface temperatures throughout the Atlantic. Beryl was the earliest second-named storm of any season since record-keeping began in 1950, according to government records. The official start date is a human-imposed one based on statistical averages of hurricane season starts.