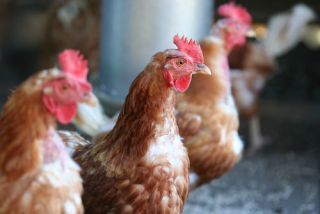 It's likely that the new H7N9 bird flu virus can spread through the air on a limited basis, according to a new study that looked at how the virus spreads in animals.

The study also provides more evidence that the virus can spread between people in close contact. However, it's unlikely the virus could cause a pandemic, unless it undergoes genetic changes that allow it to spread more efficiently between people, experts say.

According to the World Health Organization, as of May 17, health officials knew of 131 people in China who had fallen ill with the H7N9 virus , including 36 who died. Most of these cases — about 75 percent — were people who had direct contact with poultry.

In a few cases, people in the same family caught the disease, suggesting that the virus spreads between people in close contact. However, there is no evidence of sustained human-to-human transmission, WHO says.

Because many factors can influence whether a person falls ill with flu, including their overall health, researchers like to study flu viruses in animals, under controlled conditions, to better understand how they spread, said study researcher Dr. Richard Webby, a bird-flu expert at St. Jude Children's Research Hospital in Memphis, Tenn.

In the new study, researchers infected six ferrets with the H7N9 virus, all of whom developed flu symptoms. Ferrets are considered a good model to study human flu transmission because efficient spread of the flu in ferrets tends to predict efficient spread in people.

The flu virus also spread through the air, but less efficiently. Just one of three ferrets caged a short distance from infected ferrets caught the virus.

The findings mostly mirror what health officials have seen in people, Webby said.

For sustained person-to-person transmission to occur, the virus would likely have to transmit efficiently by both the airborne and direct contact routes, Webby said.

Because H7N9 doesn't transmit very well through the air, it "doesn't look like it has the capacity to [cause] a pandemic," unless the virus changes, Webby said.

H7N9 appears to be more infectious than the H5N1 bird flu virus, Webby said. When researchers infect ferrets with H5N1, they usually do not see transmission through airborne or direct contact, Webby said.

One bit of good news is that H7N9 does not appear to spread between pigs. In the study, pigs did not catch H7N9 from each other, either through the air or direct contact.

Transmission between pigs would be concerning because it would provide more opportunities for the H7N9 virus to evolve and transmit to people that way too, Webby said.

Based on the new results, pigs are unlikely to be major players in maintaining of the virus,Webby said.

However, Webby noted the study tested just one strain of H7N9, and there are other strains out there that may act differently.

The study, conducted by researchers at the University of Hong Kong and others, is published today (May 23) in the journal Science.