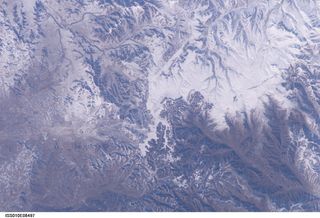 Can you see the Great Wall of China in this astronaut photo? Neither can we. The picture of central Inner Mongolia, about 200 miles north of Beijing, was taken Nov. 24, 2004, from the International Space Station, and NASA says parts of the wall are in fact visible. But the image was taken with a 180mm lens
(Image: © NASA.)

Since at least 1932, when a "Ripley's Believe It or Not!" cartoon called it “the mightiest work of man, the only one that would be visible to the human eye from the moon,” people have claimed that the Great Wall of China is visible from space. It's as commonplace a piece of astronomical lore as the idea that NASA invented Tang, Teflon and Velcro. Yet, like those claims, this one rings false, for several reasons.

Let’s start by considering what's visible from the moon, which swings around us at an average distance of around 230,000 miles (370,000 kilometers). From there, Earth is little more than a blue-and-white ball, with patches of yellow, brown or green peeking through abundant clouds. Even on a clear day, the only Earth features discernible to astronaut eyes, from the moon, are huge things such as the Arabian Peninsula, a land mass 1,200 miles (1,900 kilometers) long and 1,300 miles (2,100 kilometers) wide. Unless you had a telescope or a pair of peepers with 17,000 times normal visual acuity, the Great Wall — most of which is less than 20 feet (6 meters) wide — might as well be an earthworm.

So much for the moon. What about other regions of space?

The altitude where space begins is somewhat arbitrary; the atmosphere is not a bubble, with a clear boundary, but rather a collection of gas molecules, which gradually thin out as you go up. The Karman line, located 62 miles (100 kilometers) above mean sea level, is one widely accepted boundary; it marks the point where the air is so thin that aerodynamic flight is impossible. The lowest orbits taken by spacecraft and satellites, such as the International Space Station, range higher still — around 250 miles (400 kilometers) overhead. Can one see the Great Wall from such a distance?

Here’s where things get a little complicated. Some say, yes, we can — but only under perfect atmospheric and lighting conditions. Even though the wall ranges 5,500 miles (8,850 kilometers) or more, it not continuous, and its pieces ramble along the regional topography, so they do not break the pattern of the landscape. Their component materials, which consist mostly of crumbling stone and clay, do not stand out either.

Even China's first man in space, Yang Liwei, who had national pride at stake, admitted that he could not pick out the Great Wall during his 14-orbit mission in 2003. China’s widespread pollution haze probably didn’t help.

But there could be another reason for the Great Wall's inconspicuousness. According to Norberto López-Gil, a professor of vision sciences at University of Murcia, Spain, seeing the wall from space is physically impossible for the human eye. Gazing at the Great Wall from a mere 100 miles (160 kilometers) distant would be like looking at a two-centimeter wide cable from more than a third of a mile (half a kilometer) away; to see it, your eyes would need at least three times more acuity than the sharpest falcon, eagle or human eye — a scenario beyond the physical limits of your retina’s cone cells.

Even assuming your eyes were capable of such a feat, the statement would still be false. With eyes that sharp, you would be able to spot not only the Great Wall, but all kinds of human-built features.

In fact, NASA says astronauts can indeed see cities, highways, bridges, dams and airports, as well as city lights at night — all from in orbit.

So why, even in this space age, do we remain convinced that the Chinese historical landmark can be seen from space? Some of the confusion probably arises from high-resolution space-based photographs, which can be zoomed, cropped and processed to show manmade features quite distinctly. In particular, a satellite with radar imaging and high resolution can easily pick out the Great Wall of China. But for our eyes — human, all too human, and moving 17,000 miles per hour (27,000 kilometers per hour) — such a feat is impossible.