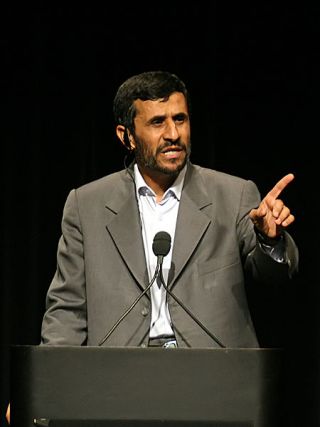 Iranian President Mahmoud Ahmadinejad has reportedly accused his country's enemies of creating a drought in Iran by somehow destroying or co-opting its share of rain clouds.

"The enemy destroys the clouds that are headed towards our country and this is a war Iran will win," Ahmadinejad said on Monday, according to Iranian news reports cited by Reuters.

Iranian authorities have made this claim repeatedly in the past year. During a severe drought in the Islamic republic last fall, Ahmadinejad said European countries were using "special equipment" to dump rainwater on their continent, leaving nothing for Iran.

Then, in July, the AFP news agency quoted Iranian Vice President Hassan Mousavi as saying, "The world arrogance and colonist (term for the West used by Iranian authorities) are influencing Iran's climate conditions using technology. The drought is an acute issue and soft war is completely evident... This level of drought is not normal."

Iran has indeed experienced more frequent and more severe droughts in recent years, according to a study published last month in the International Journal of Applied Earth Observation and Geoinformation. Scientists say the country's desertification may be attributable to regional rainfall redistributions caused by climate change. But could that explanation be wrong, and could Western Imperialists instead be sabotaging Iran's weather patterns by stealing its rain clouds?

Arlen Huggins, an atmospheric scientist at the Desert Research Institute and director of the Nevada State Weather Modification Program, says no such cloud-busting technology exists.

"In terms of dissipating clouds, you can do it on a very small scale but not anything that could change a weather pattern or create a drought situation," Huggins told Life's Little Mysteries. "Drought is related to long-term weather systems."

Huggins, who has conducted research on various weather-control strategies for the National Oceanic and Atmospheric Administration, says that in some cases, cloud seeding can be used to dissipate fog around airports. In cloud seeding, a cloud is injected with chemicals that serve as nuclei around which water vapor freezes into ice; the ice then falls as precipitation.

"Usually the cloud is seeded with dry ice or pressurized carbon dioxide, and this crystallizes the cloud droplets and turns them into ice crystals. So the ice crystals grow a lot faster than they otherwise would and then fall out [as precipitation]," he explained.

"But it's nothing like changing a regional weather pattern the size of a country."